Everyone wants a storybook relationship, complete with unconditional love from a doting partner who laughs at all your jokes, tells you how beautiful you are and supports your interests and endeavors along with lots of great sex. 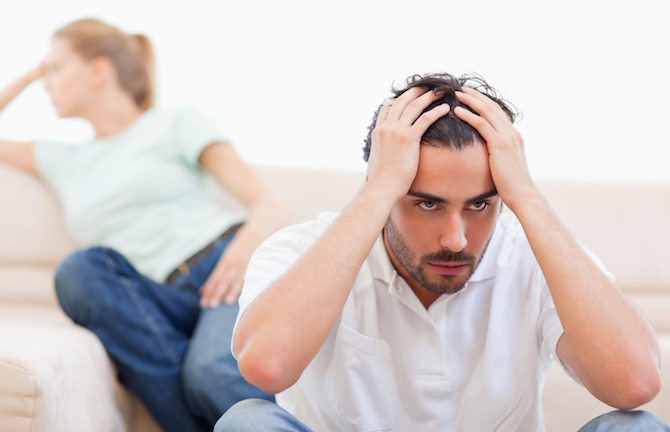 Sadly, even if the glass slipper does fit, there’s no such thing as a perfect relationship. They all take work and commitment, but some become so poisonous and difficult that they make you miserable. There’s usually no happy endings in toxic relationships, so when you know you are in one, it may be time to take off the glass slipper and put on your walking shoes.

Of course, this is always easier said than done.

1. YOU AREN’T ABLE TO BE YOUR TRUE SELF

One of the best things about a healthy relationship is being able to truly be yourself and having someone who loves all of you…even the sometimes annoying bits.

However, in a toxic relationship, one partner may not fully accept the other and try to change them in drastic ways. Unfortunately, they may succeed over time if the relationship continues. Even if your partner doesn’t explicitly state that you cannot be yourself, you might be afraid to do or say things that would upset them. You find yourself walking on eggshells to avoid conflict or always trying to give them what they want [1].

When your romantic partner continuously tries to change your personality or even physical appearance, there is a snowball effect that occurs. It will erode your self-esteem and self-confidence, eventually making you feel that you do not deserve love. This makes it even harder to walk away since you may start to believe you are lucky to have this person and will not be able to find anyone else.

2. YOU BECOME ISOLATED FROM FRIENDS AND FAMILY

Ideally, your love will fit in perfectly with your circle of friends and embrace your family as their own. This is something you should try to look out for when making him attracted in the first place (by the way, these tips will help get him attracted). It’s ok if it doesn’t work out exactly that way since everyone has their own taste in friends and family relationships can be tricky.

However, it becomes a problem if they try to change your relationships with the people close to you, either by preventing you from seeing them or by talking bad about them.

While it may appear on the surface that your partner doesn’t like your friends and family, in a toxic relationship there may be something darker going on. It may be that your partner wants you to devote your attention solely to them, or that they believe severing your relationships with others will make you more dependent.

In truly toxic relationships they may even wish to prevent you from talking with your friends and family alone so that they won’t be able to point out the red flags they have seen concerning your love life. And just to be clear, this has nothing to do with the no contact rule discussed here. Controlling behavior & mistreatment like this is absolutely a sign of a toxic, harmful and unhealthy relationship [2, 3].

3. KEEPING SCORE AND BRINGING UP PAST MISTAKES

Once upon a time, you were late to pick them up at the airport, forgot to call when you said you would or mentioned you didn’t like their mom’s casserole and you are still hearing about it even though it was months ago. Mistakes happen, and it’s even ok to argue about them when they do.

But, it’s not ok to keep score and resurrect past wrongs over and over again. Not only is this hurtful, when the past is brought into current arguments it takes the focus off the issue and prevents real problem-solving. Instead, deal with issues as they arise. Forgiving and forgetting is hard, so sometimes you have to go with the next best thing… forgiving and never bringing it up again.

Let’s say you ask your sweetie to wash the dishes.

They immediately smile and say they are coming, only to wait until just before bed to do it and then splash water all over the cabinet and miss bits of food. What might really be going on is that don’t like washing the dishes and rather than saying so they put it off and did a poor job so you wouldn’t ask again.

Passive aggressiveness comes in many forms including, but not limited to:

But it usually stems from a desire to avoid expressing feelings and communicating openly.

In a healthy relationship, both partners should feel safe in saying how they feel and calmly expressing anger. However, in a toxic relationship, one partner may resort to negative non-verbal communication or trying to provoke a response from the other by finding petty ways to upset them. To prevent your relationship from veering into toxic territory, be honest about your emotions, keep the lines of communication open and encourage them to do the same.

Who doesn’t love getting flowers or a just-because present, being whisked away on a spontaneous vacation or treated to an upscale restaurant? These are just a few super cute things you can do for your man. Here are a bunch more.

These may be signs that your honey is a keeper. But, if they are using material things to cover problems in the relationship or to buy your affection, these pretty presents may actually be red flags. A classic example of this is arguing the evening before and receiving a lush bouquet the next day.

You didn’t resolve the issue, but you sweep it aside because they sent flowers. That problem isn’t going anywhere, and no matter how much money is spent, it is going to come back again. To keep yours from becoming a toxic relationship, use gifts as a lovely addition to dealing with relationship issues instead of a replacement.

6. THREATS TO END THE RELATIONSHIP

What’s the difference between, “I think it takes you too long to get dressed” and “I can’t be with someone that takes so long to get ready?” The first is a simple statement while the second is a thinly veiled threat.

It’s completely natural to not like everything about another person, but threatening to end a commitment over every criticism is a form of emotional blackmail. Eventually, the victim becomes terrified that their every action might really be the one that sparks a breakup. Abusers may threaten to leave for someone else who is better than you.

To keep the relationship on a healthy path, hold back judgment and criticism and communicate concerns in a kind but honest way. However, if you are already in a toxic relationship riddled with threats, it may be best to grant them their wish and end it.

It might feel flattering when your sweetie desires your attention, but when jealousy rears it’s ugly head every time you speak to, glance at or mention another person, the relationship has undoubtedly turned sour. Jealousy and insecurity are definitely a sign of an unhealthy relationship [4, 5].

In truly toxic relationships, a jealous partner may go as far as peeking into email accounts, grabbing your phone to read text messages, hacking into your Facebook account and even showing up unexpectedly at your social events. Checking up like this is unhealthy no matter the form it takes [6]. Often, jealousy doesn’t occur as a response to inappropriate behaviors, but rather stems from feelings of inadequacy and unworthiness.

Rather than letting it get that far, start with a foundation of trust, set boundaries (find out more about boundaries in a relationship), make sure to deal with any of your own feelings of inadequacy rather than forcing them onto your partner. And hopefully, your partner will do the same.

8. NEVER GETTING ON THE SAME PAGE

Emotions and commitment develop at different paces for everyone. It’s completely natural if you fall in love quickly and it takes him awhile, or if he is ready to move in together while she wants to hold on to her own place for a bit longer.

However, toxic relationships often develop when people aren’t on the same page about fundamental relationship issues. For example, if you want a marriage and a houseful of rug rats and they are looking for something more casual, resentment and bitterness are likely to build up.

It’s tempting for people in toxic relationships to tell themselves that their partner will eventually change their mind, but it’s just as likely that they never will. Rather than feeling like you have wasted time in a dead-end relationship, be open and honest about what you want and believe them when they tell you what they are looking for. If you cannot tell the truth, you’re contributing to your partner’s false perception of reality [7].

9. CRITICIZING IN FRONT OF OTHERS

Every girl’s night out features venting about how husbands and boyfriends leave laundry on the floor and work too late while sipping Cosmopolitans. It’s healthy to let off some steam once in awhile, but criticizing and tearing down the one you love in front of others can be a sign of a toxic relationship, especially if it’s particularly vicious.

A person who puts you down all the time you is a toxic type known as a Shamer [8].

Let’s be honest; great sex is one of the biggest benefits of a healthy relationship. Not only is it fun, physical intimacy is a great way to express emotions and strengthen bonds.

However, sex can turn negative if it is used as a method of control in a toxic relationship. This can play out in several different ways. The first is asking for, or even demanding, sex when the other partner doesn’t have the desire. The second, less well-known way is withholding sex or physical affection.

However, withholding sex is not the same as saying no. It’s ok to say no due to a lack of desire, but it’s not ok to withhold sex as a way to control or manipulate the relationship or to use sex as a bartering chip. Withholding sex ends in feelings of rejection and vulnerability. These emotions can make it more difficult to leave the relationship because it may seem as though no one else will find you desirable.

The whole point of romantic relationships is enjoying a loving bond and having fun together. The clearest sign of a toxic relationship is when the bad outweighs the good.

If you are constantly arguing [9], always feel stressed about the partnership, frequently complain about the other, dread spending time together or feel worse after seeing them, the relationship may not be worth salvaging. There’s no such thing as a perfect relationship, and every one requires compromise, patience and a willingness to work through issues. However, in toxic relationships, the scales tip dramatically toward negativity.

Toxic relationships aren’t just unhappy; they are unhealthy. Over time they can lead to a severe lack of self-confidence and self-esteem and even depression. If you’re in a toxic relationship, you probably feel a lot of anxiety about it.