What’s your type? Perhaps you freely admit to liking men who are tall, dark, and handsome or you’ve been accused of having a thing for men of a certain age (which may be entirely true!). Most people have a type – and some seem to have one even if they don’t realize this – but what does having a type really mean? And do we gain anything by breaking potential partners down into specific types? 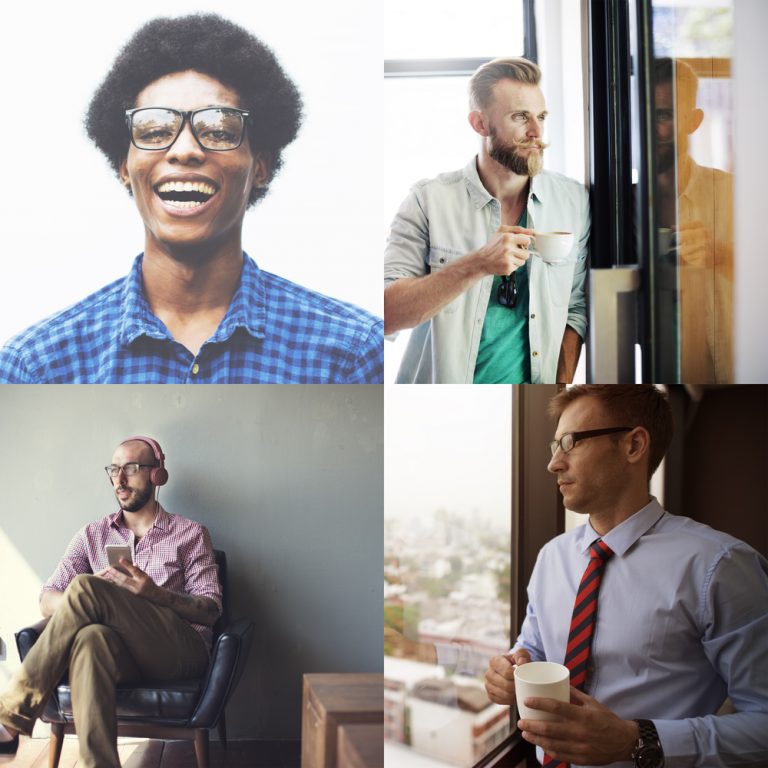 It’s impossible to break down each type of guy perfectly, and we’ll touch on this later. But we gave it a shot!

1. Athletic: This type of man who likes playing sports and/or hitting up the gym — and you can tell. He might be a team player because he’s so used to playing in teams or he may be a little vain because he works hard on his body (and this might extend to the woman he dates, too). Athletic guys often enjoy watching sports, but they may not have much time for it.

2. Artist: Artists can be precocious and pretentious. But they often seem deep and soulful. Something about them stands out and attracts them to you. Whatever his preferred form of art (painting, graphic design, writing poetry or making music are just a few types), he gets into it hardcore. He might have trouble making time for you or he may act a little erratic when he’s inspired. That’s just how creativity works!

3. Geek: A geek loves all of that pop culture stuff that’s become pretty mainstream: video games, comic books, Sci-fi, fantasy and tabletop games just to name a few. But a person who is passionate about something can geek out about just about everything, and that’s part of the draw!

4. Loner: He’s mysterious and maybe a little dark. When you get down to it, he might not trust people, or he may simply be an introvert who’s a little shy (read on introverts here). Hopefully, once he opens up, you’ll understand him – perhaps like no one else ever has!

5. Socialite: In school, he might have been part of the popular clique. He’s a social butterfly who has a busy schedule and is well-liked. Dating him can seem like you’re dating a celebrity, but it can get old if there’s no substance beneath it or if you never have time alone together.

6. Brain: He loves to learn and might want to impart his knowledge to you. He’s probably book smart, and he may be into related things like computers and programming.

7. Techie: He loves gadgets. He buys computers, cell phones, video game consoles, drones and other devices before anyone else. And you can bet he loves showing them off! He might be in it for the attention, or he might really love his tech.

8. Hippie: He’s a free spirit who might enjoy music fests and partaking in certain herbs. He’s pretty low-key, which you might find relaxing if you’re not.

9. Romantic: He’s all about love – finding it, showing it and making it last. But sometimes a romantic can be more in love with the idea of love than with you, and he may not be realistic about what a relationship entails.

10. Man’s man: He’s strong and tough. He understands cars and sports. He drinks an unpretentious beer. He’s the manly man who makes you feel safe and doesn’t need to talk about his feelings more than you do yours.

11. Successful: He’s goal-oriented and successful at his job, which he puts a lot of time and effort into. He can provide for you and he’ll likely want to because it shows off his success. But he might be more married to his job than he is you.

12. Mama’s boy: He’s close to his mom, but maybe that closeness goes too far. He might expect you to fill her role (doing his laundry and making all his food) and critique you for not being just like her. Or you might find his mom becomes some sort of competition.

13. Mooch: He likes to slide by in life. It seems like he just doesn’t care that he’s working a dead-end job and living with his parents in his 40s. You’ll end up paying for everything and taking care of him if you’re not careful!

14. Unavailable: He’s afraid of commitment. Or he’s married. Maybe he’s unsure what he wants. What sort of women go after these guys? Sometimes it’s just an accident – you meet someone who is unavailable. But maybe you don’t have high self-esteem and have trouble believing you’re worth someone who actively chooses you. Perhaps you also don’t want to commit to a relationship or are afraid of it ending in the long run.

You can probably see how these types overlap or how they fail to describe a three-dimensional personality. That’s true – and it’s one of the pitfalls of lumping guys into groups!

Psst if you’re looking for a post on the types of relationships women get into and what that says about them, click here.

SCIENCE SAYS YOU HAVE A TYPE – SORT OF

Before we tell you exactly why you might not have a set-in-stone type like you think you do (and why that’s a good thing!), let’s explain what science does know about sexual attraction.

Researchers studied both identical and fraternal twins to determine the differences between who they were attracted to. If attraction were all in your biology, you would expect the identical twins who share more genes to have more of the same preferences than fraternal twins. But this wasn’t the case. Scientists concluded that environment plays a strong role in our attraction [2].

Studies have also shown that people prefer those who look the most like them. Some researchers believe this is because our genes are on the hunt for a similar phenotype (the traits that exist due to the interplay between your genes and environment). This is about the types of men who might be genetically compatible with you rather than the type of man whose personality you tend to go for.

Furthermore, studies find that straight women (straight men and gay women don’t fall into this category) are likely to pick men who share facial similarities to their fathers. Women who were adopted show a similar trend in choosing partners who share features with their adopted fathers [3].

This is called sexual imprinting; although, Jung would likely blame it on the Electra complex (where a girl has an inappropriate obsession with her father). Sexual imprinting is usually a harmless part of the learning process. But it might explain why a woman chooses emotionally unavailable partners if she was unable to connect with her father when she was younger. It’s certainly not a guarantee.

On the other hand, you can overcome these genetic tendencies.  Perhaps you realize you tend to chase men and decide to break the cycle. Or maybe you simply have a different type than your father, which brings us to our next point.

DO YOU REALLY HAVE A TYPE?

As you can see, biology plays a role in attraction, but it’s not the whole story. Your environment is significant, too, and even people raised in the same environment can have drastically different preferences for partners. Just imagine if you like thin men with high cheekbones and your sister likes burly men with beards.

But does that mean you have one specific type? Not really. And why should you? Your environment changes all the time, so you constantly have new influences. Who among us is the same person they were five, ten or twenty years ago?

As we suggested above, a person can realize that they choose partners poorly and consciously strive to choose better ones. But you’re also subconsciously influenced by your current partner (or perhaps a person who you wish was your partner).

In one study, women who were in a relationship listed ideal partner traits that were in line with their current partners [1]. In short, her ideal mate looked an awful lot like her current partner!

Why is this? One possible explanation is that people tend to tweak their preferences so that someone who might not fit their ideal type of man suddenly becomes suitable. Perhaps you never liked beards (or motorheads or computer geeks – there’s no limit here) before, but you’re crushing on a new guy (discover how to talk to your crush). You’re probably going to focus on the good and tweak your preferences a little, so you don’t miss out on a good thing.

It’s important to remember that in the real world, no person can be the embodiment of any one type. People are complicated. Yes, that includes men.

Perhaps you’re a woman who enjoys makeup and computer programming. You don’t fit one specific type, either. So you can understand why it’s difficult and frustrating when people focus on their “type” too much.

FORGET YOUR TYPE – LOOK FOR THIS INSTEAD!

In fact, not focusing on a single type of man might be the smartest thing to do! If your standards for a potential boyfriend are too rigid, you might very well overlook someone who is quite compatible because you’re too busy looking for someone better. And what if what you think you want isn’t healthy (check out these signs of a healthy relationship), attainable or otherwise positive to begin with? You might not know yourself as well as you think you do (the same study even found that people found themselves attracted to those who fell outside of their type, anyway [1]).

If this sounds like you, then you might want to analyze the reason you’re still single. More on this here.

So if you’re a woman looking for a man but your “must-have” list was a little long, try easing up on your requirements (try these 15 signs he’s the one for you). This doesn’t mean that you should ignore red flags that a guy isn’t so nice or that you should force yourself to settle with someone of there’s no chemistry or attraction.  But you should focus on the things that matter and let the things that don’t matter slide a bit.

What matters more than what your type is?

If you can’t trust him, don’t have the same goals and moral code and both of you aren’t willing to put work into your relationship, it’s not a good match even if he seems to be your “type.”

But someone’s job or income level or even age is less important and should be negotiable.

You might find these things in someone who is actually your opposite, and if you’ve dated throughout different points in your life, you’re likely to realize that your type has changed over time. While you wanted someone fun and sex-crazed when you were younger, you grew to want someone you can settle down with. Or you find yourself committed to your job and preferring casual relationships now because you don’t have much time.

As you can see, there are a few types of men, but people don’t neatly fall into boxes. Even if you could easily divide people into groups, limiting yourself to one type – your type – might mean you’re missing out on someone great!