Love is something we do, not just something we feel. When we become bored, complacent, or stressed, love can fade. Look out for these signs your husband doesn’t love you, which could also mean that your marriage might be in trouble. 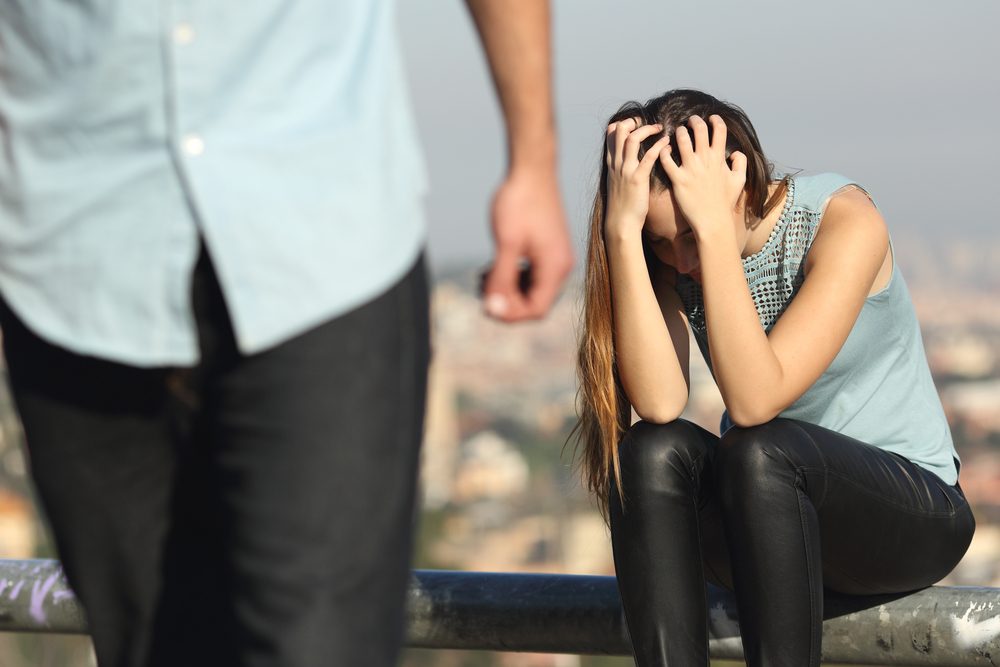 Note that not all of these are signs that your husband doesn’t love you. Not every guy is into physical affection or is good with birthdays, for example. When you read this list, look for changes from his normal behavior.

A sexless marriage could come about for different reasons. Your husband may have erectile dysfunction, or he might be too stressed with life in general to feel like having sex. If you haven’t had sex with your husband in several months, you need to talk with your husband about this. No physical contact or sex could be a sign your husband doesn’t love you.

Related: How to Fix Your Sexless Marriage

Or maybe there is a marital issue that the two of you can work on fixing together. You might benefit from couples’ counseling. Explore all options before concluding that he doesn’t love you.

And when you do talk, it’s brief and of little significance. If all you talk about is getting things done, such as picking up the kids, getting groceries, and other ordinary topics, there is a problem, and this may be a sign your husband doesn’t love you. You’re not fighting, which is good. But you’re not sharing your lives with each other, either, which signals that one (or both) of you has checked out. You need to share your innermost thoughts and feelings, your hopes and dreams, and your ambitions and your downfalls with one another to have intimacy.

If all you talk about are mundane topics, like whether you fed the cat, you may as well be roommates.

3. HE DOESN’T SPEND QUALITY TIME WITH YOU

You know how you can feel alone in a crowd? You can also feel alone in a marriage, even if your husband is sitting in the same room with you, making this a sign your husband doesn’t love you. If it matters little to him whether you’re there or not, he isn’t spending time with you; he’s spending time at home. There is a difference. You need to connect to have quality time, not just live in the same home.

Psst. Quality time is one of the five love languages. Learn more about this.

Just because your husband doesn’t say, “I love you,” all the time doesn’t necessarily mean that he doesn’t love you. But if he used to say those three magic words often, and suddenly, you never hear him say that to you anymore, it could mean he doesn’t love you.

All couples will have fights or disagreements from time to time. But if all you do is fight or bicker, that signals a problem. The way you fight can also be problematic. It’s healthy if you fight and then both work together to resolve the issue. But if there is name-calling and hurtful behavior, or if he constantly brings up past issues without having an interest in resolution, this is a sign of trouble in the marriage.

Read: Signs Your Marriage May Be Over Soon

6. YOU’RE THE ONLY ONE PUTTING EFFORT INTO THE MARRIAGE

If he never fights with you, this might not be a good sign. It could mean that he’s checked out, and that he no longer cares. If you feel as if you’re always the one who wants to spend time together, talk, have sex, whatever, and he just goes along, he probably isn’t invested in the relationship.

8. HE AVOIDS SPENDING TIME AT HOME

He works overtime often, spends a lot of his time with friends, or practically lives at the gym. If this is something new, it could be a sign he no longer loves you or that there are problems in the marriage. You need to ask him why he’s no longer home, but be prepared for the answer.

9. HE’S HAVING AN AFFAIR

If your husband is having an affair, it’s never a good thing. But a one-night stand that he regrets and promises to never do again might be something you can fix. You can probably work that out if you both love each other. But if your husband has been carrying on a long-term affair, it could mean that he’s fallen out of love with you and is a huge sign your husband doesn’t love you. There’s a good chance that he loves this other woman. There isn’t much hope to save this type of marriage.

Learn how to handle an affair.

10. HE REFUSES TO TALK ABOUT YOUR RELATIONSHIP

If you ask your husband to talk about what’s been going on, whatever it is, if he loves you, he’ll listen. He may not want to. Not many men enjoy hearing, “Honey, we need to talk.” But if he cares, he will. If he keeps putting you off, knowing that you need to talk to him, he doesn’t want you to find out the truth. It’s a sign he doesn’t love you if he refuses to talk with you about the relationship.

And if he doesn’t want to talk about it, your relationship is probably over. Look for these 10 signs to confirm.

11. HE DOESN’T ANSWER HIS PHONE

He isn’t reachable or disappears for periods of time. A man who’s connected and involved with the relationship will stay in touch. He’ll be there for you if you need him. And if he loves you, he will look forward to just checking in.

If he ignores a call from you, it could just mean he’s unavailable that one time, or maybe you call too much. But if he regularly doesn’t answer when you call or text, or even worse, doesn’t let you know where he is, he’s checked out and it’s a sign he may not love you anymore.

When he is home, he might spend all his time working, playing video games, or just surfing the internet — anything but spending time with you. Let’s better explain what we mean by “he’s checked out.” Couples who are invested in each other relate to each other, for good and for bad. Even fighting is better than being completely checked out. Because when there is fighting, there are still feelings involved. But when your husband checks out, he might still like you, but you no longer hold a place in his heart.

13. HE COMPARES YOU WITH OTHER WOMEN

Your husband might compare you with friends, relatives, or with complete strangers. If you always come out on the short end of the comparison, it can get old fast. This is not healthy for you. It will only make you upset and hurt.

He’s probably not wishing you really were like the people you’re being compared to. This comparison is usually about something else. He may be feeling insecure about himself, or he may be unhappy in the marriage. Don’t let the constant comparisons get to you, and don’t ignore them. Confront him, and ask him why he’s always comparing you to others.

When you’re feeling sick, sad, or stressed, you want your husband to be your soft place, to provide comfort. Marriage, when it works well, becomes a haven for you and your husband. You become a resource for each other. You nurture each other and make the world a better place for yourselves.

When he no longer loves you, he probably won’t provide this type of comfort for you anymore.

15. HE’S NOT INVOLVED WITH YOUR LIFE

This includes your work, your family, even your children. You might be able to tell that he doesn’t love you anymore if he takes no interest in your life. If he acts as if he doesn’t care whether you are around or not, he’s probably fallen out of love.

Your husband doesn’t love you anymore? Don’t panic. You may be able to fall back in love. Learn more.

16. HE’S STOPPED TRYING TO IMPRESS YOU

When a man loves a woman, he usually wants to impress her. He might make sure he looks nice, or he might plan a nice date. Maybe he’ll cook a meal. Even helping out around the house to ease your burden is a way a man might try to impress you. But if he doesn’t do anything and doesn’t make any effort at all to get your attention, he might not be in love with you.

Not showing a public display of affection (more on that here) may not mean anything. Some men would never do that. But if your man loves to show affection anywhere, including out in public, and now no longer will do so, even when you initiate it, he may not love you anymore.

18. HE DOESN’T DISCUSS A FUTURE WITH YOU

Couples who are in love live for today, happily reminisce about the past, and plan a future together. If your man is never interested in discussing a future with you, it may be because he is not envisioning one.

He might be letting himself go, or he might be making an extra effort to look good. Either could signal a problem. If he no longer cares about you, he might not care how you see him. Or if he has suddenly taken an interest in his appearance, he may be trying to impress someone else.

IN SOME CASES, HE MAY NEVER HAVE LOVED YOU: LOOK FOR THE SIGNS

YOU GOT MARRIED BECAUSE OF FINANCES OR CONVENIENCE

If your marriage didn’t start off with any love or chemistry, you can both learn to love each other. But that is taking a risk. He may never come to love you if he never loved you in the first place. Perhaps the two of you didn’t ask all the right questions before getting married.

IT WAS A GREEN CARD MARRIAGE

If he married you only to be able to live in the country, you can’t expect that he will necessarily love you as time goes by. He may learn to love you, but this was a marriage for a purpose other than love

He might not have ever admitted to himself he was gay. It’s can be easier to appear straight for a few months or even a few years, but after a while, it becomes difficult to live a lie. This was nothing you did. He’s just now coming to grips with his true self.

Maybe your husband was feeling pressure from family to get married. Or maybe he felt that he could progress faster in his career if he were married. This is another case where he married for reasons other than love.

HIS FOCUS WAS THE WEDDING

Instead of the focus being on you and the long-term marriage, he may have only been caught up in the thought of being married and the wedding. When this happens, we tend to think it’s women who do this, but some men are guilty of doing this as well. Once the excitement of the wedding ends, there may be nothing else.

YOU GOT MARRIED AS AN ULTIMATUM

Maybe you told him he’d have to marry you or lose you, and he wasn’t ready to lose you … but he wasn’t sure he was in love with you, either. Or you may have gotten married to fix your problems, but that doesn’t necessarily lead to love.

Although every marriage has highs and lows, if you see many signs your husband doesn’t love you, it might be time for a serious talk or even to consider divorce. Don’t jump to conclusions, but don’t ignore the trouble signs, either.