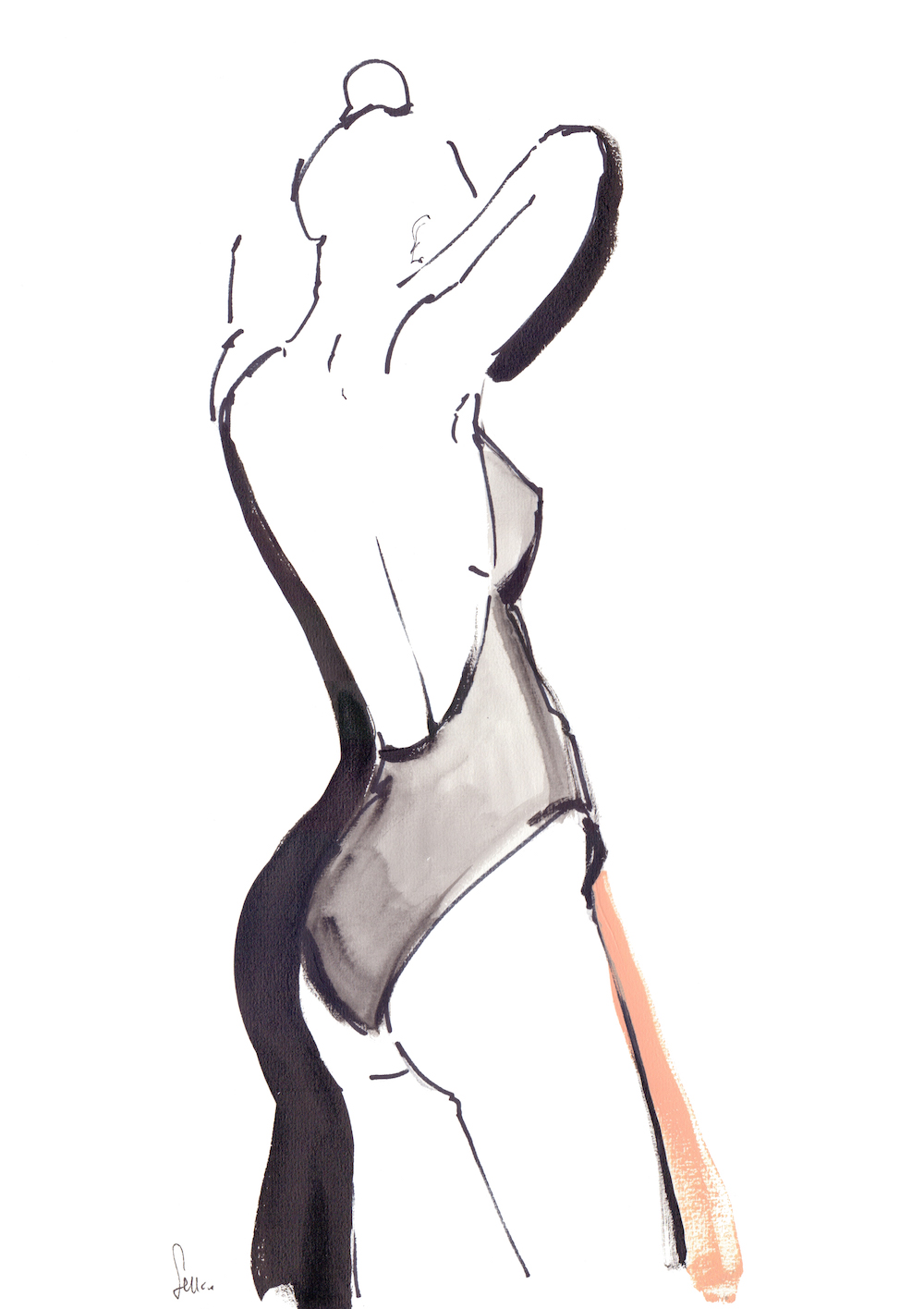 These are just a few suggestions, but you’ll notice that each of these 3 places are quite private and not too loud.

Smell – Candles or incense treat his nose. You can spray your signature scent around the room or apply lotion to get his attention. Pick scented massage products to fill the room with a sexy smell. Leather is a scent many people enjoy. If either of you is sensitive to smells, you might want to skip this. A headache is not sexy.

Sight – Dressing up sexy will tantalize his eyes, and we’ll get to that shortly. Don’t forget other things he can see. Declutter a room and lower the lights. Switch out bulbs if the ones you have are bright. Candles make a room feel romantic or sexy, too, and LED candles don’t pose a fire risk. Drape a scarf over a lamp to make a room feel sexy. If you’re a little kinky, a blindfold prevents him from seeing anything, which can really amplify the mood!

Taste – There are products that you can wear so your skin will taste different. Flavored lube can do this, too. But he might just enjoy the way you taste. Consider wine or another food that’s known to be an aphrodisiac.

Touch – Silky sheets and scarves, fur, gloves, your own hair on his skin. All of these things can engage with his sense of touch. Don’t forget how the room feels, either. Too hot or too cold can be uncomfortable. It should be in a comfortable range to undress.

2. THINK ABOUT HOW YOU LOOK

So am I advising that you dress like a slut?

The Bad Girls Bible has an entire article dedicated to dressing sexy too.

One element, in particular, is lingerie, sensual pieces of clothing and accessories designed to show off your asset when you wear them before – and sometimes after – sex. The key to picking out the right piece of lingerie is to choose a piece that highlights your best areas and perhaps minimizes the ones you’re concerned about.

Check out our guide to picking the right lingerie for your body.

You can often pair lingerie with stockings and heels, which many guys love.

Remember, however, that you want to feel comfortable in your lingerie. He’ll be able to tell if you’re not comfortable, and it’s definitely a turn off for both of you. So don’t force yourself to wear lingerie if you’re not feeling it.

Another thing to consider is layers. That way, you can take them off one by one as you strip for him (learn how) or even give him a lap dance.

When I say touching, I do not mean groping or anything inappropriate. I mean that you should just be making physical contact with him whenever you are talking to him or hanging out with him. This physical contact will help to turn your man on and also let him know how you feel about him. It should start off with nothing too serious or creepy and slowly build up until you are getting closer to him.

Below are some examples of how to touch him with increasing intimacy:

When you’re more confident that he wants to have sex with you, such as when you’re in a relationship, you can up the ante. Kiss him deeply and passionately (tips here). Press your body against his or perhaps grind your butt against his crotch. Massage his penis through his pants or unzip his fly and start giving him head.

Focus on his erogenous zones. Don’t forget his nipples, either. Most men find this aids or causes arousal [1].

It’s understandable if you want to drop hints to initiate sex.

Or he may miss your cues altogether 🙁

Don’t worry…a lot of guys are slow to get the hint! The solution…

Try being direct instead.

One small study found that simply undressing yourself or your partner leads to sex 100 percent of the time [2]. If you strip down, you’ll be getting down. It’s that simple.

Directly asking for sex has a positive success rate, too: 76%, But undressing might feel sexier and less awkward.

Women initiate sex less often than men [3], but your man might appreciate it if you initiate sex. Plus, doing so can make you feel powerful. It might be awkward the first time or two, but the more you do it, the more accustomed you’ll become to initiating sex.

Read: 9 Ways to Initiate Sex, Drive Him Wild, and Take Control of Your Sex Life

Taking a shower or bubble bath together – You can invite your man into the shower for shower sex. More on that here. The steam and slippery suds will get him in the mood.

Send him a sexy text – Many women get turned on when they look at their phones and see a message telling them how hot they are or how much their partners desire them. Why not do the same? You can up the ante by sending a voice or video recording or a photo of you. Remember, it doesn’t have to be X-rated. Just give him a glimpse of what’s in store for him. Check out these tips for sexy texts, sexting examples, or learn how to send a sexy selfie.

Shop for some sexy lingerie or toys – Doing so can rev up both of your engines, and you might find yourselves having sex after you checkout online or come home from the store. And if you’re shopping online, you’ll be excited for your package to show up on your doorstep!

Talk about fantasies – Not only is this a way to turn him on, but you can discover new things to try in bed. Here are the 10 most common fantasies.

Massage – Although you read about the importance of touch above, don’t forget to give him a massage (learn how to give a sensual massage). Not only does this connect the two of you physically, but receiving a massage can reduce stress or promote relaxation [5, 6, 7, 8, 9, 10]. And stress is a serious killer of desire for many people (especially women( [11 p 118, 12 p 29].

What do we mean?

You might remember this idea of “conditioning” if you took a psychology class. What you might not realize is that it can apply to sex, too [13]!

Being comfortable is key, so it’s okay to add little sexy things or to find your own brand of sexy rather than imitating someone else.

7. BE CAREFUL WITH LAUGHTER

This means not being too goofy or silly and not talking too much or too loudly. It’s okay to lower your voice to a sexy whisper (but one that he can hear) and to take things slowly.

Erection — an erect penis and nipples are good signs that he’s horny…yes men’s nipples can get erect too!

Flush – red and warm skin, especially on the face and chest, indicate arousal.

Breathing – if he’s breathing faster and deeper, you’re on the right track.

WHEN HE’S JUST NOT INTO IT

But sometimes it won’t…

Be Direct – Maybe he’s just not getting the hint, which is why we suggest being direct. It might feel more daunting or seem less spontaneous, but it ensures your partner knows exactly what you want. I’m mentioning this a second time (being direct) as sometimes guys are a little dumb and fail to pick up on what you’re doing, no matter how obvious it seems.

But what about when he’s not in the mood?

When he says “No” directly?

First, it can feel like a rejection, and that might sting. That doesn’t mean you give up completely.

But, you should remember that he’s rejecting sex this one time, not sex all the time or you as a person and partner. It’s not a personal attack or a statement about you.

In fact, there could be something preventing him from having sex that you might not consider such as a tummy ache that he doesn’t want to tell you about. All too often, we take rejections personally when they may say nothing about us.

You can always try next time.

TALK TO A DOCTOR

However, if there are no underlying relationship issues, it could be a health concern. Hormones, especially testosterone, play a significant role in a man’s sexual function, including desire [17]. If your man is not experiencing desire like he used to or if he’s having issues with erection, a hormone imbalance might be at fault.

We recommend that men discuss this issue with their doctors when other possible causes have been ruled out (and the same advice applies to women).

Related: How to Increase Libido for Women

Talking to his doctor can also rule out other possible causes of low libido such as depression [18], anxiety [19], medications for those and other conditions [20, 21, 22, 23], injury or another disease (diabetes, can interfere with desire [24], and cancer can play a role, too [25]). Although it’s normal for testosterone to decrease with age, a serious deficiency known as andropause occurs later in life and can interfere with sexual function and desire [26].

Some people are afraid to talk to their doctor about sexual issues because it’s embarrassing or because it’s not important. But sexual health contributes to your quality of life, which makes it significant!

You’ve probably familiar with the sexual response cycle.  It contains four stages/phases, each with its own physiological changes [27, 28, 29, 30]:

Unlike men, women have a much smaller or even no refractory period. This is one reason why many women are able to have multiple orgasms.

The sexual response cycle is a bit different for women [33], and other models have been suggested with circular shapes [34, 35]. However, the 4-phase model works for men not because they don’t have desire but because they typically experience it differently.

It could also respond to a sexy scene in a book or movie, a certain smell, or a song. If you have responsive desire, this probably makes sense, and you can name the things that your sex drive responds to.

The other part is the sexual inhibition system or SES. This functions like brakes. Brakes decrease sex drive and can include relationship issues, poor body image, and stress, among other things.

And what happens when you try to drive when you’ve got one foot on the accelerator and the other on the brake?

The good news is that most men have more sensitive accelerators and less sensitive brakes than women  [11 p 60], so turning him on should be pretty easy. In fact, he might even be more likely to make risky sexual decisions because of this [43, 40]!

Researchers have asked participants whether they were aroused. Then, they’d use tools such as a vaginal photoplethysmograph, which uses light to track blood flow in a woman’s vagina, or a penile plethysmograph, which measures how hard a penis is [47], to determine if the body is physically aroused. This is sometimes called “objective arousal” [51].