7 WAYS TO GET A MAN TO MARRY YOU

Being head-over-heels in love can also make you think about marriage, even if you’ve never been marriage-minded before. This is especially true if you think you’ve found the one. Even if you’re not in a hurry to get married, you might wonder why you’ve been dating your man for so long without a proposal. There’s no single reason, so getting a man to marry you will vary based on your own relationship. 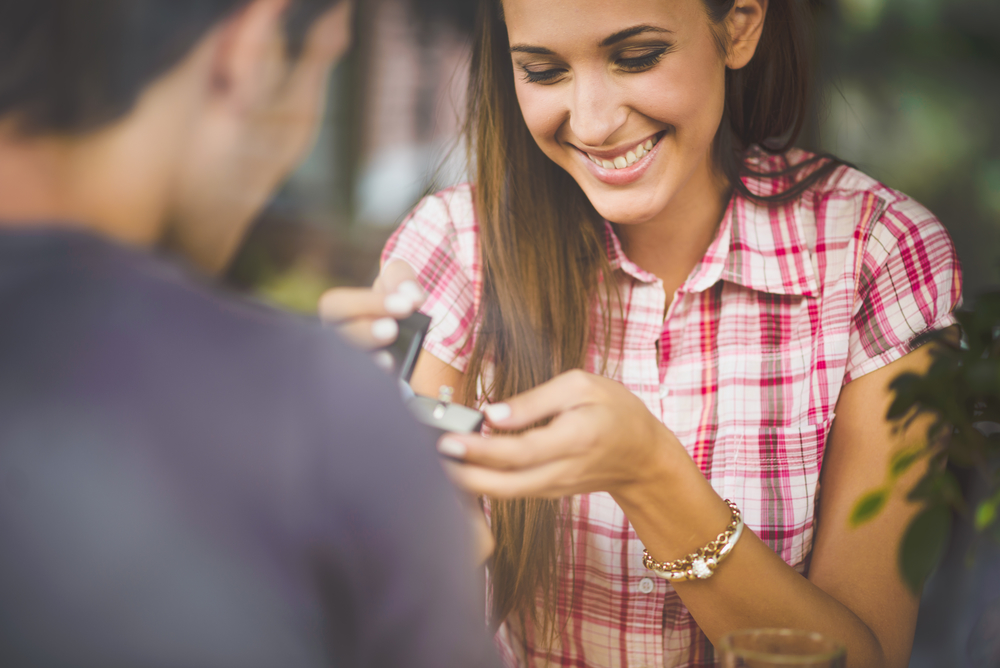 Before you brainstorm how to get him to propose, consider why you want him to marry you. This is just one important question to ask before marriage. Are you in love? Do you share finances or have children? Are you feeling pressure from friends and family? There are plenty of reasons to get married, but you should only do it because it’s what you want and not because that’s what everyone else thinks you should do.

Many women are taught that their value hinges on finding and keeping a man. If you’re over thirty and single, who will want you? Obviously, you’re defective in some way! This leads some women to settle, to couple up faster than they should and to force their relationships to progress more quickly than they would normally. Getting married becomes a goal while everything else fades into the background.

Once you’re sure you want to get married, too, read on for some ideas to get him to propose!

1. BE WHO HE WANTS TO MARRY

Want to know how to get a man to marry you? Be marriage material. Your relationship should be strong. You should be couple-minded. Be thoughtful and supportive of him. Encourage him to be the best he can be and love him unconditionally. Don’t be petty, spiteful, selfish, immature or irresponsible. Do the things in this post. He might be waiting around for you to curb some of your less appealing traits or he might simply be waiting for someone who already is everything he wants in a potential wife.

2. TAKE SOME TIME FOR YOURSELF

If your man isn’t proposing simply because you’re always available, and he thinks he doesn’t need to, then it’s time to become unavailable. Take a vacation, either by yourself or with your friends or family. Show him that you’re still independent, that you don’t need him. The time apart can also help him reflect on how he misses you and enjoys having you around. If he’s in love with you and eventually wants to get married, you might come back to a ring!

3. TELL HIM YOU WANT TO GET MARRIED

Hints don’t always work. Your man might not realize you want to get married (although, they usually do and they’re just playing dumb). So sit him down and ask about his goals in life and your relationship. Tell him yours, which includes marriage. If you’ve got a timeline, let him know and why. This might be because you have children, share a home or want to be prepared should something happen to one of you in the future. The two of you might come to a mutual conclusion. While this isn’t as romantic as some people like, but it’s practical and can save you a lot of strife.

This discussion might also highlight ways in which the two of you are incompatible. Read more about that in this post.

Some men are reluctant to get married because they stand to lose so much if everything heads south. There are tons of horror stories of women who have married successful men and taken half – or more – of their money after a divorce. If you’re in love with your man and confident in your relationship, then a prenuptial agreement only provides reassurance. It doesn’t mean you’re worried that divorce is on the horizon, and it can make your man more likely to marry you if this is the reason holding him back. Understanding his point of view is crucial if you want to know how to get a man to marry you.

It’s 2016. You’re a modern woman, and you don’t need to wait around or to get him to propose. So why not propose yourself? Perhaps buy him some cufflinks or a nice watch, or skip that step completely if he’s not that type of guy. You can plan the proposal, or it can be spontaneous. Just make sure it’s genuine when you ask for his hand in marriage. Not every man will like this idea, but you should know him well enough to know if that’s true. Look for signs he wants to marry you.

A lot of women are afraid to leave men who won’t commit to them because they already live together. But you shouldn’t be cooking, cleaning and taking care of him if he’s not going to meet your main needs like marriage. So move out. Pack up your things or pack up his. Show him that you’re not just settling. Like taking a vacation, this move will have him miss you. But it’s more serious. Give him a time frame, such as 30 days, which he has to make up his mind. At the end of that month, you can move back or move on.

7. GIVE HIM AN ULTIMATUM

Ultimatums are generally not good in a healthy relationship, but if you’ve exhausted every other option, this might be it. It’s a bit more extreme than just moving out because you’re clearly saying it’s marriage or nothing else. This might not be the best way to get a man to marry you, either. Read on for a word of caution.

Many of these things can wind up with you breaking up. If neither of you can compromise, you’ve got to be prepared to be single. But isn’t that better than wasting time with a man who never wants to get married if marriage is something you absolutely need?

It’s also important to realize that many men are clear about their intentions, but women often don’t listen because they don’t want to hear it. So he probably means it when he says he doesn’t want marriage, kids or anything else. This is especially true for men who have already been married and may have been burned in the process.

Even if you do get him to propose, neither of you will be happy if he feels coerced. You’ll both grow resentful: him because he was forced and you because you had to make him do it. This disharmony might even lead to divorce. More on that here. We’re not saying that you shouldn’t encourage things along, but sometimes things that are difficult just aren’t meant to be.

Finally, you don’t want to lie about something to get him to marry you. Pregnancy is a big one, but lots of women – and some men – will try to “trap” their partners with lies. It’s difficult to keep up with one lie once you begin, and it will certainly end in tears once he realized he’s been duped.

But if he’s on the edge about marriage, you can be the type of person he’ll want to marry and potentially start a family with, and you can push him from “Maybe” to “I do!”. Still, there’s no one way to get a man to marry you, and some of these suggestions can make him dig his heels in about the idea. Communication is essential to a great relationship whether you want to get married or not. Make sure your man understands why marriage is important to you, and if he’s reluctant, try to see it from his side.