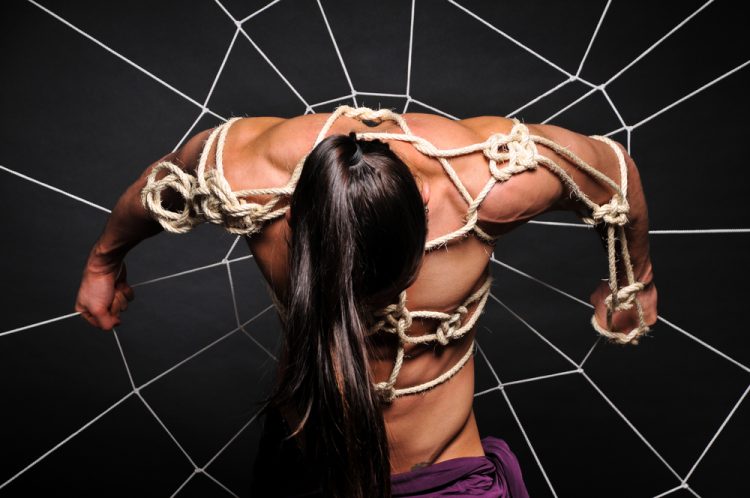 Subspace is often compared to runner’s high, a feeling of euphoria that runners and other athletes experience during an intense workout. A similar sense of euphoria may occur during subspace, but it’s not the only symptom. Symptoms include:

Now, the symptoms of subspace might sound a little concerning. Is it safe? And why does it happen, anyway? Read on if you want to find out.

Your body creates hormones all the time. They’re necessary to function. When your hormones are out of balance, you can run into all sorts of problems like weight gain or even weight loss [1] and this can happen for seemingly unrelated reasons like when you have a cancerous tumor [2]. But much of the time, hormones work right and are helpful.

This is followed by activity from your thyroid gland [6], which is responsible for regulating multiple metabolic processes in your body, appetite being one of them [7] (one of the reasons many submissives end scenes feeling hungry and/or thirsty). All the while, breathing becomes more rapid, and your tissues fill with more oxygenated blood.

Cortisol activities endorphins, the class of chemicals that are responsible for the euphoric feeling during scenes or even a long run [8]. They also reduce pain Another hormone within the endogenous opioids group activates: enkephalins. These chemicals reduce the sensations of pain [9] [10] although some studies still have trouble find evidence of this [11].

Finally, we have dopamine, a hormone that’s typically associated with pleasure. While you might experience a dopamine rush as you anticipate a reward, certain types of pain can also stimulate dopamine production [12]!

Like we’ve mentioned, subspace differs between people and even scenes, which makes it difficult to describe accurately. But we’ll give it a shot. Many people characterize subspace by its flying or “floaty” feeling. Others might describe this as a sense of detachment, even going so far as to call it an out-of-body experience.

You might still be getting paddled, but you might feel very little of it or nothing at all.

You might have difficulty controlling or moving your body, and this can affect your ability to speak.

Losing perception of time is common, and it’s also shared with a mindset known as “flow.” Flow is a mental state that occurs when you are deeply invested in your current activity that may aid learning [13]. Some researchers suggest that these two states may be related [14].

THE DANGERS OF SUBSPACE

Any of these things could lead to intense play that leaves you physically sore or in emotional upheaval. That’s why it’s so crucial for the dominant partner to play close attention to the submissive during a scene.  In fact, some dominants may want to avoid subspace altogether or, at the very least, during public scenes.

A submissive or dominant might also want to avoid subspace to ensure the sub feels every whack, thud, or slap.

If you don’t trust a dominant to handle the situation when you enter subspace, you may not want to play with him. Alternatively, if you’re playing the role of the top, you need to trust yourself to take care of the situation.

As play winds down — or if it has to stop suddenly — a submissive may be left with an entirely new bundle of feelings. It’s normal to experience everything from exhaustion to hunger to cold to disorientation toward the end of the scene and for a few hours afterward. This is known as sub drop, and it happens because most of your hormones are leveling off (cortisol remains elevated for a bit). Your body is exhausted from all that work!

Aftercare can also include treating any abrasions or bruises (there are some great spanking balms available to soothe skin!), so have a First Aid kit available just in case.

Sub drop isn’t always bad. Some submissives don’t feel any worse for the wear. Instead, they feel more of a glow as they go on with their lives after a scene.

Sub drop and subspace can affect people so differently, which makes it hard to describe. Your body may not register every scene as a stressor and respond with the flight or fight response. Some people may have a lower tolerance to certain things or take longer to warm up before they find themselves in subspace.

It’s certainly interesting how our bodies can react at various times, and subspace is a perfect example of that reaction! Fortunately, you can protect yourself and your partner from any negatives by knowing what to expect.