BEN WA BALLS: WHAT THEY ARE & WHY YOU MUST USE THEM ADRIANA

Ben Wa balls – are they the real deal? Will they change your sex life? Are there medical benefits? Or is it all just hype with nothing to back it up? We’ve got the low down on everything you need to know about Ben Wa balls. 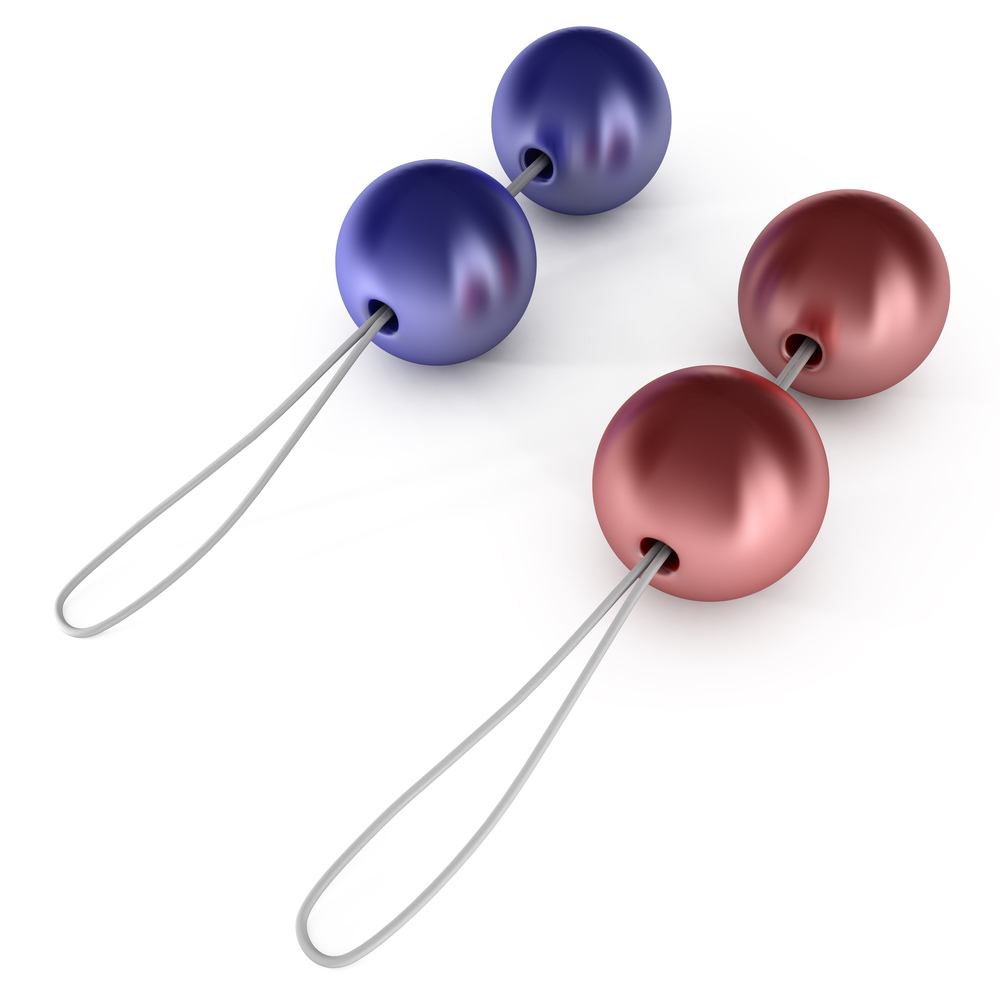 You might have heard of Ben Wa balls, which made an appearance in the Fifty Shades books and movies. Thanks to that story, Kegel balls are experiencing renewed popularity (and you can even buy Fifty shades branded Kegel balls). However, Ben Wa balls were used by Japanese men for more pleasurable sex, and some even made noise sometime around 500 A.D. Women, too, used Ben Wa balls for similar purposes as they do today.

WHAT DO BEN WA BALLS DO?

The function of Ben Wa balls is twofold. First, they’re supposed to provide stimulation for the woman wearing them. Secondly, Ben Wa balls can be used to strengthen your pubococcygeus muscles, also known as the PC muscles and the muscles you use to stop the flow of urine [1] and the very same muscles that contract during orgasm. Learn just where PC muscles are in your anatomy.

This may help you have better orgasms or achieve multiple orgasms.

Recent sex research has shown that doing Kegels leads to better orgasms and increased arousal for postmenopausal women who perform them [2].

Read More: The Most Interesting Sexuality Research from 2017

If you’ve given birth to a baby, your doctor probably recommended Kegel exercises which can reduce incontinence episodes in up to 50-60% of women [3], specifically stress urinary incontinence [4], which can even affect teens and young women [5]. More on that in this post about Kegel exercises.

Kegel exercises can benefit people with fecal incontinence and vaginismus, too [6] [7] [8].

It’s unlikely you’ll orgasm through the use of Ben Wa balls alone, but they can certainly act as a tease to help get you in the mood. This is especially true if you find a set of Ben Wa balls that stimulates your G-spot. Read more about vaginal orgasms through G-spot stimulation.

Plus, you’ll be extra aware of your genitals and erogenous zones, and there’s nothing wrong with that!

Whether you find Ben Wa balls and the more modern kegel balls to be pleasurable depends on personal preference and the type of balls you’ll use. Traditional Ben Wa balls are made of metal and smaller than their modern counterparts, typically sized between 1/2″ and 2″ in diameter. Some describe these similar in size to “pigeon’s eggs” [9].

Sometimes you’ll find lighter, plastic Ben Wa “beads” of a similar size. Magnetic hematite can even be smoothed to a sphere that you can wear inside. This metal is especially hefty, with some sets weighing almost 5 ounces!

Glass Ben Wa balls, usually in clear or black, are more recent and often larger than the traditional balls. They’re still weighty and smooth, which can make it difficult to keep them in, especially when you first start with your exercises. Some manufacturers will add colored glass or even a flower bud in the center of the glass ball for visual appeal. Egg-shaped glass balls, sometimes with ridges, depart from the traditional shape of ben wa balls.

Remember that larger and lighter balls are easier for a beginner because they’re less likely to slip out than smaller, heavy Ben Wa balls.

The modern take on Ben Wa balls offers some user-friendly and hygienic updates. You can now easily find vaginal balls made from body-safe silicone, like many of the vibrators that are on the market. More on that here.

Silicone lacks pores, so you can completely disinfect your Ben Wa balls. Plus, the retrieval cords can also be made from a softer silicone so that the entire thing can be sterilized. Two brands to consider are Fun Factory, which makes Smart Balls, and Luna Beads by Lelo.

Lelo’s Luna Beads were the original to allow you to swap between two different weights of beads but Jopen and California Exotics have similar offerings, too. Interchangeable systems mean you can start with lighter Ben Wa balls and add weight to increase the intensity of your pelvic floor workout. However, this isn’t necessary for most people.

Silicone balls tend to be lighter — from 1 to 3 ounces, typically – and larger with more texture, which makes them easier to grasp during insertion and removal. They also tend to include inner balls that vibrate free within the outer shell as opposed to solid glass Ben Wa balls. As you do exercises or simply go about your day, you can feel those inner balls vibrate.

According to the companies, this causes involuntary contractions of your pelvic floor muscles, which strengthens them passively. This might be more pleasurable and a greater motivation to perform your kegel exercises than traditional Ben Wa balls, which you might not even feel while they’re inserted.

Finding the right size is important for comfort and satisfaction with your Ben Wa balls. Fun Factory makes a single Smart Ball while you can buy single balls, which are a better option if dual balls tend to be uncomfortable and if wearing two of them causes pinching, from makers such as Vedo and Jopen or in a set by Lovelife.

Other options include single egg-shaped Ben Wa balls, which may be made of glass, stone or silicone. The tapered design is more comfortable and pleasurable for some women. If you ever wanted to know just how strong your PC muscles are, sex toy maker Minna Life has a smart kegel exerciser that measures this and helps you improve!

You have several choices if you want to be able to choose the weight and size of your kegel balls. Systems such as Lelo’s Luna Beads and Ami by JeJoue, which comes with three difference pelvic exerciser options, mean you don’t have to settle for one-size-fits-all Ben Wa balls anymore. As your PC muscles become stronger, you can adjust size and weight for a more impactful workout!

Of course, companies have figured out how to add vibrations to Ben Wa balls, too. Maia, for example, makes a vibrating, dual-ball toy for internal use. And some of those egg-shaped toys work well for this, too. Jopen has an option for you, too. Because they’re insertable, these vibrators tend to have unique control systems. They may be remote controlled, like Lelo’s Hula Beads or CalExotic’s Inspire, have a button on the device or even respond to your muscle contractions to provide vibrations.

Inflation has also been used for Kegel exercisers. The Intensity is a device unlike Ben Wa balls or anything we’ve discussed. Insert it, inflate it, and perform your Kegel exercises.

Vibrance is a Kegel exerciser that has actually been studied and found to help women improve urinary stress incontinence [10].

Today’s smart Kegel toys are a far cry from the original Ben Wa balls. Smart toys typically vibrate and are Bluetooth-enabled, so you can connect them to your phone, launch an app, and do your Kegel exercises with the help of technology. Below are a few of the smart Kegel balls available, but we’re sure more will enter the market soon!

Smart Kegel toys mean you never have to ask “Am I doing this right?” or “Is this working?” because you can feel and see the difference. While Ben Wa balls can cost under $20, smart toys will typically run over $100, however.

GETTING STARTED WITH BEN WA BALLS

Before using any sex toy, you’ll want to wash it with soap and water. Ben Wa balls, like most insertables, are better with lube. If your Kegel balls are made from silicone, and you want to use a silicone lube, do a small spot test of lube and rub vigorously for 10 minutes. If any deterioration occurs, you should only use water-based lube with the balls.

You can generally use your favorite lube, but you might prefer a thicker one because it’s less messy. Find out how to choose the best lube.

Some people recommend lying down when you insert Kegel balls, but you might have an easier time if you squat. For dual Ben Wa balls, insert one ball at a time. Remember to breathe as holding your breath will keep your muscles tense and make it more difficult to insert the balls. Keep breathing during your workout to prevent additional pressure on your muscles [11] [12].

Dual balls may “bend” when they’re inside. That’s okay. Let the balls shift to a comfortable position. Just make sure they’re pushed in enough to be behind your pubic bone.

If you’re having a hard time with dual balls, a single ball or an elongated design might be more comfortable.

You might very well like or even love the sensation of Ben Wa balls after they’re inserted, but there’s no guarantee. So go into things with realistic expectations. Pleasure isn’t guaranteed, but you can still get a workout with them!

Psst, you have to read this article about hands-free orgasms.

WORK OUT YOUR PC MUSCLES

So what’s a good workout anyway? For starters, you should be standing up. Gravity works to pull those balls out once you’ve got them inserted – squatting can help with this – so you use your muscles to keep them in place. Any kegel exercises you do without tools can be done with a Ben Wa ball or two inserted. Here are a few ideas to get you started:

Many of these activities can be done while you’re running errands, doing chores or even watching TV! It might not seem like much of a workout, but your man will feel the difference when you have sex. Discover the key to tightening your vagina.

Some activities can greatly increase the stimulation, including wearing your kegel balls while running, while sitting in a rocking chair and during vigorous exercise. You can press a wand type massager against a kegel ball or its retrieval cord to make it vibrate, which is especially interesting when it’s the type with the inner ball.

Some people wear Ben Wa balls for hours at a time, but that’s up to you. You might wear them long enough to do some targeted workouts, while you run to the grocery story or clean your house. If the balls become uncomfortable, take them out.

When you’re ready to remove them, use your PC muscles and the string to pull them out before washing.

Kegel balls can be difficult to remove, especially if they’re the type that are unconnected with a string. Don’t worry, however. They can’t get stuck as long as you have a cervix [15]. Although, some women who have had a hysterectomy might want to avoid this type of Ben Wa ball. Squat and push with your muscles to help expel the Ben Wa balls.

For many women, using Ben Wa balls is pleasurable, but it can also help increase the elasticity of your PC muscles, which has real health benefits.