FROM SILENT TO ENGAGING: HOW TO KEEP A CONVERSATION GOING

There’s nothing worse than awkward silences when you’re out with a guy that you’re totally into. You don’t want to just sit there and endure the awkwardness, but you also probably don’t want to yammer nervously about something totally random just to fill the silence. 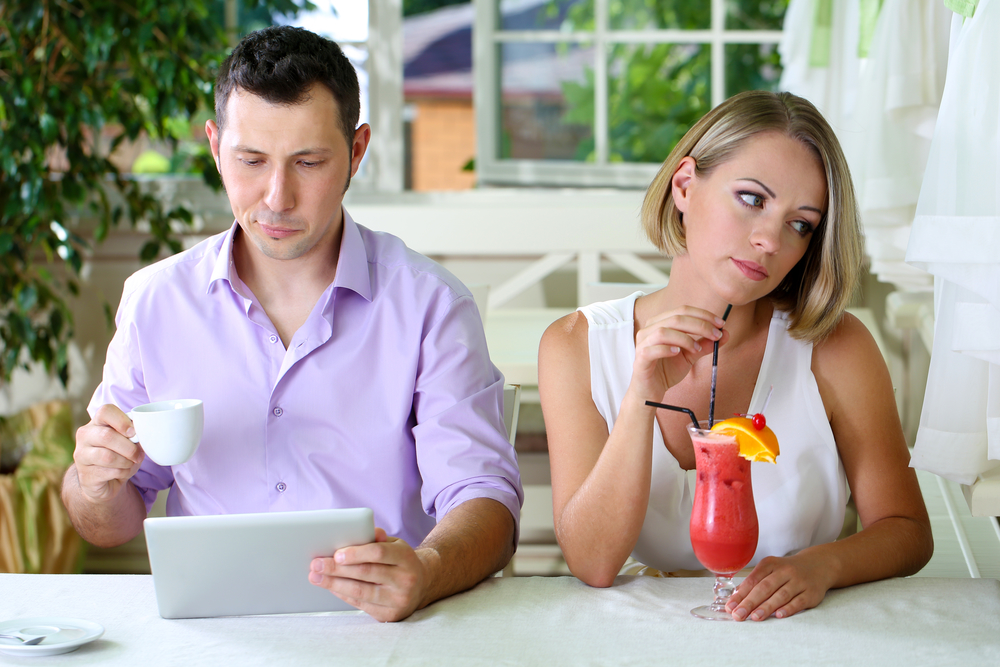 When you’re with someone new, it’s totally normal to experience lulls in the conversation. After all, you just met each other, so you don’t have much to go off of, and plus you probably don’t feel comfortable enough to be totally open about yourself just yet. So when these inevitable moments occur, the first step is to not panic. Once you have that step covered, here are a few ideas for how to keep a conversation going when all else fails.

Asking questions is a natural part of any conversation, and it can show your partner that you’re paying attention and are truly interested in what he’s saying. However, at a certain point it might come off as mechanical and one-sided. For example, instead of asking “What do you do for a living?” you can keep a conversation going by making a statement like “You seem like someone who works in advertising.” This gives him an opportunity to tell you what he really does for a living, while also allowing you to be a little flirtatious and quirky with your assumptions.

You can also use this as an opportunity to flirt. Check out these flirting tips.

A silence usually indicates that the current conversation topic has reached a plateau, which is your cue to change the subject with some preconceived ideas. Start with something you know a lot about, like some cool aspect of your job or a unique experience you had while traveling abroad. Your passion can be a turn on for him.

Current events are always useful to have on hand, since these can often be common points of interest. Plus, these timely, newsworthy events can invite an interesting discussion going forward.

As a side note, forget the common dating taboo of avoiding discussions on religion and politics. If you don’t see eye-to-eye with these two very important belief categories, it’s best to know sooner rather than later.

Although you might be fascinated by his love of poetry, it might not be the best conversation to keep returning to if you aren’t a big reader yourself. It’s important that you are given plenty of opportunities to show off what you know also. Having a mutual and in-depth familiarity with a specific subject will give you something to connect with, while also opening up the door for minor disagreements within these subjects. As a result, you can have a nuanced and stimulating debate that might prompt him to think deeply about your perspective.

A conversation isn’t just an exchange of words, you’re also sending messages to the other person through eye contact and body language. Looking down a lot and folding your arms might give your guy the impression that you’re bored or uncomfortable, which could cause him to speak less or act nervous himself. Check out more tips here.

If you’re a shy person – guys like shy girls, too! – make an extra effort to keep your body language open and responsive to what he’s saying.

Oh, and one of the crucial tips for how to keep a conversation going is to put the cell phone away. There’s nothing more annoying than a person who is constantly fidgeting with his or her phone, and it can have a negative impact on the conversation in and of itself.

5. DON’T BE AFRAID TO INTERRUPT

This doesn’t mean you should cut him off whenever you feel like it, but you should feel comfortable cutting in every once in a while when he says something that immediately resonates with you. This will make the conversation feel more natural and fluid. Keeping a conversation going depends on a healthy amount of back-and-forth, and sometimes your partner might just be rambling out of nervousness or to avoid awkward silences himself, in which case you’ll probably be doing him a favor by interrupting to speak your mind.

Also keep in mind that most guys love women that are independent and don’t share every one of their opinions.

A conversation really shouldn’t be taken that seriously, and you don’t want to give off the impression that you’re overly formal and don’t know how to have a good time. So if you’re trying to lighten up a heavy moment to keep a conversation going, try out one of these classic conversation games:

It’s a cliche because it’s true: men love a challenge, romantically and otherwise. And let’s be honest, women do too. How many times have you found yourself chasing after, or at least yearning for, the “one that got away”?  Even though it might seem more natural – and more comfortable, for that matter – to be completely non-confrontational and accommodating with your date, but this approach is basically guaranteed to turn the conversation into a snoozefest.

One fun way to challenge him is to be competitive. For example, you can attend a bar trivia night and play on different teams. Or you can simply disagree with something he says and defend your position, rather than simply nodding to be polite. There’s a healthy balance to this tactic for how to keep a conversation going. After all, you don’t want to come off as high-maintenance or just plain argumentative. If it starts to get a little too heated, try steering the conversation back to something you both agree on.

Sometimes when you hit a lull in a conversation, you just need a second to clear your mind and collect your thoughts. Just excuse yourself to the restroom or go outside for a smoke break/fresh air. Most people don’t usually carry on conversations for hours at a time, especially with someone they just met. But silences in the conversation just can’t help but stir up some awkwardness. So it’s best for the both of you to take a break and enjoy the silence alone.

You’ll be much better off if you set yourself up for conversational success. For example, if you’re the kind of person that finds it difficult to speak constantly for over an hour, it probably isn’t a great idea to schedule a dinner date. Although this is a classic date that you’ll have to get around to sooner or later, perhaps save it for the second date, it’s best to not have the added stress of trying to not speak with your mouth full and keep the conversation interesting.

A movie followed by coffee might be a better choice for more reserved speakers, since it limits the pressure of talking constantly, and guarantees a conversation topic that you both can contribute to. If you ever feel out of ideas for how to keep a conversation going, you can simply refer to something in the film that you both can discuss. Not to mention, coffee is a casual enough date idea where you won’t feel pressured to stick around through too many awkward lulls.

10. DON’T BE AFRAID TO GET EMOTIONAL

Studies have shown that heightened emotional states trigger memory building, which is why your sharpest memories probably surround events when you were especially happy, sad, angry, excited, etc. So if you include highly emotional subjects in the conversation, your date is more likely to feel engaged in the conversation and remember it vividly later. You don’t want to scare your date off by being too intense or drawing up negative emotions, so try to stick to subjects that recall happy or exciting emotions.

For example, you can keep a conversation going by asking him to tell you about the craziest thing he’s ever done or tell him your own crazy story to get his heart beating. You can even have fun with this strategy for a little bit by making up a story about having a crazy ex-husband who just got out of prison to get his heart racing in a different way, before revealing that this is a total lie.

Keeping a conversation going is something that gets easier with experience and as your relationship progresses through stages, so the most important tip is to learn as much as you can from the trial-and-error process of your conversations with others. Everyone is different and will naturally respond differently to different strategies. So remember that one failed tactic in your conversation doesn’t make it completely useless for future conversations.

Having a conversation is sort of like dancing with another person – you have to work with the other person and be able to improvise from moment to moment. For example, if your partner is in more of a playful mood, you can reciprocate this energy by playing silly conversation games and breaking a few etiquette rules for fun’s sake. If your partner seems to be feeling more laid-back and serious, be flexible enough to accommodate this mood as well in your conversation. Letting your date take the lead in this way will help take some of the pressure off of you to keep a conversation going, which naturally leads to better results overall.