HOW TO DEAL WITH JEALOUSY & NOT GO CRAZY OR ACT WEIRD

Ah yes, jealousy… that horrible, sinking feeling that can ruin our otherwise perfect relationship. We’ve all been there, wondering if our jealousy is warranted or if we’re just crazy. 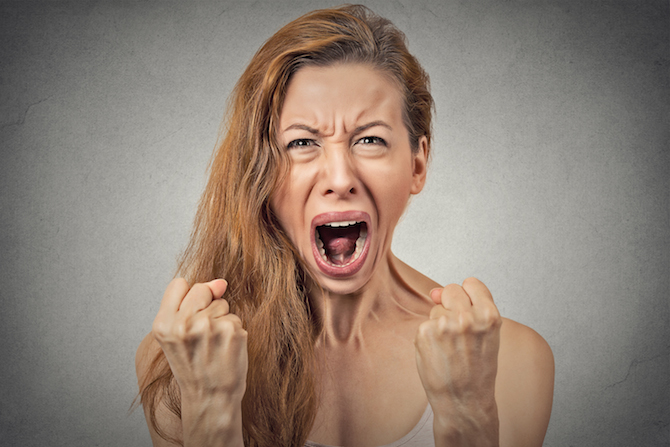 Jealousy…it can make even the most logical, rational person act crazy.

Fortunately, there’s no need to stress. I’m going to show you why we feel jealousy, why some jealousy is a good thing (seriously!), how to differentiate between the healthy kind of jealousy and the bunny boiler kind… but most importantly, I’m going to teach you how to deal with jealousy in a healthy, adult way.

It’s not always easy, but with the right mindset, you can overcome your jealous feelings.

WHY DO WOMEN FEEL JEALOUS?

Humans can feel jealous about different aspects of life, such as coveting a neighbor’s car or job. Usually, jealousy is about wanting something another person has. But jealousy in a relationship is not so much about being jealous of the partner but more about a fear of losing the relationship to “something better.” It often comes down to a partner thinking that other women could offer more to her partner than she can. She might be worried that her boyfriend or husband will want her friend because she thinks the friend is prettier than she is or that he’ll want his female boss because she has wealth and status.

Jealousy has been connected in research to the brain’s attachment system and social bonding [1]. Overall, there are many ideas about jealousy and definitions of different types of jealousy. What is agreed upon is that jealousy is common and normal. Jealousy in close relationships happens in most cultures around the world, while cultures do influence how jealousy is expressed [2].

CAN SOME JEALOUSY BE GOOD?

It turns out that jealousy is actually pretty complex. The real questions to ask might not be about whether it’s okay to be jealous but which type of jealousy is okay. Jealousy is generally seen as a negative emotion and one that can become a poison to relationships. Yet it’s a common human experience, so is there some kind of purpose to it? Could some jealousy ever be a good thing?

It is argued that jealousy can serve a positive purpose in helping a relationship last. For instance, it might help partners realize when a situation or person is threatening the relationship and encourage them to take steps that strengthen and maintain the relationship. In numerous studies, jealousy has actually been connected with positive experiences that help the relationship last, such as greater feelings of love for the other person and better stability in the relationship [4, 5, 6].When thought about this way, it can make sense that jealousy is something that evolved with humans as a way to keep relationships intact. It is thought that over time, jealousy has helped people prevent a rival from taking the partner and the partner’s advantages related to procreating. Rather than being a problem that certain people struggle with, jealousy is seen in an evolutionary standpoint as a universal human response that comes from strategies like mate guarding and mate retention that are designed to help a relationship. Nonetheless, this evolutionary theory does point to certain situations that are more likely to create jealousy, such as when one partner can attract other potential partners better than the other [4].

Overall, studies note that jealousy can be seen as a positive trait when there is a real threat to the relationship that the person is responding to, whereas it is unhealthy when the person feels jealous when there is nothing to be jealous over. The first type is “emotional/reactive jealousy,” which is what people more often expressed in a study and encompasses the normal human response to a relationship-threatening situation. The bad type is“cognitive/suspicious jealousy,” which is more about feeling jealous when there is not a need to be [4]. Another type of jealousy described is behavioral jealousy, which is how the person reacts in response to feelings of jealousy. The cognitive type of jealousy has been seen as the most damaging to marital satisfaction, followed by the behavioral and emotional types [7].

While it might be normal and sometimes positive to get a bit jealous, this emotion often becomes negative and can lead to problems within the relationship. One study gives the idea that jealousy because of dependency, threats to exclusivity and sexual possessiveness could be adaptive/positive as a reaction, whereas jealousy because of self-depreciation, distrust or competitiveness/vindictiveness are maladaptive/negative [8].

Jealousy can be connected to a lack of trust and to other negative behaviors. For example, it has been connected with physical abuse toward a female from a male [9]. It could also be connected to cheating. Concerning trust, anxiously attached people felt more cognitive and behavioral types of jealousy when they also felt less trust. Attachment anxiety, or an anxiously attached partner, means that a person has trouble relying on a partner, fears rejection and tends to continuously look for signs of how available the partner is to them. This leads them to read into things, ruminate and have negative thoughts about the future of the relationship [10].

More about this in our post on attachment styles.

It makes sense for people to react with jealousy to real situations that instigate it, such as a partner being flirtatious or even cheating (look out for these signs of cheating). On the other hand, suspicious jealousy is seen as an unhealthy expression of jealousy because the person feels jealous even though there are not any situations to encourage the jealous reaction. This tends to go along with other negative emotions related to the relationship, such as anxiety, insecurity, and doubt [4].

Unhealthy jealousy often goes along with negative personality traits within the person. For example, one study found that people with high levels of psychopathy can be more likely to have cognitive jealousy, especially when they also have low self-esteem [11].

WHAT ARE SOME TERRIBLE WAYS OF DEALING WITH JEALOUSY?

Then there is the consideration of how a person reacts and deals with jealousy, which would be behavioral jealousy. It’s seen as normal to have that initial feeling of jealousy, yet a strong and healthy relationship also needs to have trust [12].

Discover how to get over your trust issues.

Some ways that women react to jealousy can only make things worse and can be very unhealthy behaviors. When the woman becomes abusive, controlling and possessive, these are bad signs. Also, the person might have double standards that she can spend time with other men while her partner is not allowed to spend time with other women [13].

Other poor ways to handle jealousy are to follow behaviors that give in to it and fuel it. For example, the woman might check the partner’s phone, pockets, and car for signs of a threat to the relationship. The partner might not believe the other one and could become psychologically or physically abusive. These kinds of behaviors are more likely in anxiously attached people [10, 12].

WHEN SHOULD A WOMAN TRY TO GET PAST JEALOUSY?

Rather than let jealousy take over her life or give in to unhealthy expressions of it, there are ways for a woman to work on the emotion and overcome it. As mentioned, it tends to be okay and natural when someone reacts with jealousy in a moment that warrants it. But it’s worth working on the emotion when a person continuously feels the emotion, feels it when it’s not warranted or feels like she can’t handle the emotion. Also, Alabama Public Health notes that feeling jealous without cause or taking actions with the goal of making the other feel jealous are not signs of love or a healthy relationship [15].

HOW TO OVERCOME JEALOUSY

How can a woman handle jealous feelings better? For one, the way she expresses the jealousy might help the relationship. A study found that the partner responded better when the jealous person used positive communication than when they used negative communication and manipulation attempts [16]. A woman could talk to the partner about how she feels, discuss the situation that brought up the feeling of jealousy and consider with her partner whether there is any merit to that feeling in regards to that situation. Also, it can help to communicate the jealous feelings in healthy ways, such as waiting until feeling calmer to discuss it, actively listening and speaking in private [17].

To handle jealousy, Michigan State University Extension recommends a person recognize the fear and anger of jealousy and try to understand why she is feeling this way each time she feels jealous. So you could try to change your ideas when there is no reason for jealousy. She could realize that you’re reading into a situation when the reality might be different. Also, it might help to consider how your jealousy is affecting your partner in the relationship [18]. You could think of personal reasons for feeling jealous and observe the kinds of situations that bring up the jealousy [17].

There can also be solutions for certain types of people and types of jealousy. For example, a study found that touch in the relationship helped protect against jealousy for anxiously attached people [19]. In marriage, strengthening the commitment and trust in the relationship offers a solution to jealousy [20].While some people may have success working on the jealous feelings on their own, some may benefit from therapy. This is something that partners can work on together in couples therapy [21]. You or your partner could also work on your personal problems that contribute to the jealousy in individual therapy. Cognitive-behavioral therapy is one type of therapy that could be used for handling jealousy, as well as mindfulness and acceptance practices that help people create some separation between themselves and the jealous feelings [22].