HYMEN 101: BREAKING THE MYTHS TO DETERMINE THE TRUTH

Women and their sexuality can be such a mystery, can’t they? At the Princess Fantasy, we hear questions about female sexuality all the time.What do women want in bed? Where is the clitoris? And one of the most frequently asked questions is also one that’s most often answered incorrectly: What is the hymen? 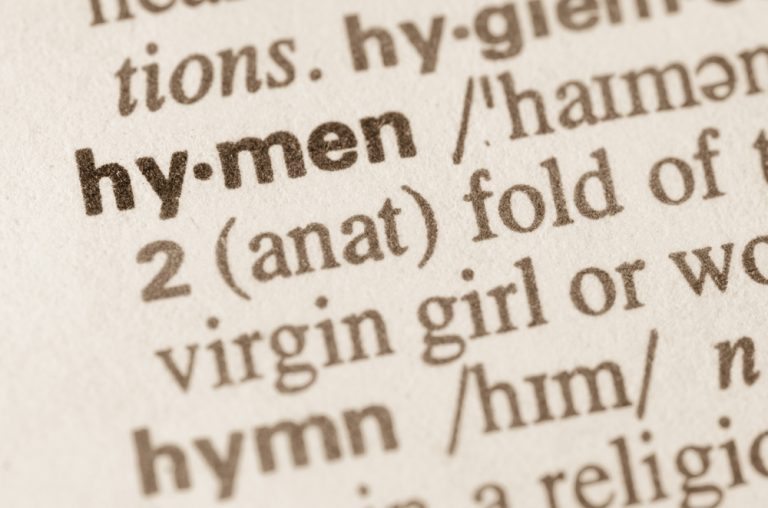 As it turns out, the knowledge you gleaned in school about the hymen might not be accurate, and it can even be harmful.

PERVASIVE MYTHS ABOUT WHAT THE HYMEN IS

If you haven’t done any research on the hymen since your school health classes, then your knowledge of the hymen can probably be summed up with the following.

Historically, the idea that bleeding during your first time was pretty prevalent. Men may have paraded bloody sheets around villages, and Katharine of Aragon was even rumored to have kept her sheets, bringing them out only when her marriage to King Henry was annulled as proof of her virginity before their wedding night.

As it turns out, this information isn’t even medically accurate; although, it’s easily used to make women feel bad. How would you feel if a doctor performed a hymen examination to determine that you weren’t actually a virgin or, even worse, that you had never been the victim of sexual assault even when you had? Both of these mindsets are symptoms of slut shaming. More on that here.

So what, then, is a hymen exactly? Read on to find out.

WHAT IS THE HYMEN REALLY?

Read: The 20 Best Sex Toys for Maximum Pleasure and Intimacy

Many women discover their hymens are imperforate when trying to insert a tampon or have sex for the first time. It’s just not possible, and it hurts like hell.

Other issues can make penetration difficult, too, including vaginismus. More about that.

Hymens are graded based on shape, aside from the imperforate hymen, there are two other hymen types [5] that may require surgical intervention.

No matter what type of hymen you have, beware that needing surgery doesn’t mean anything is wrong with you! Think of an imperforate, microperforate, septate or cribriform hymen simply like your tonsils. Some people have problems with this organ and need surgery to correct it, but it’s not a statement about their value and their lives continue normally after they’ve healed.

IN SEARCH OF A NORMAL HYMEN

What the hymen is normally is elastic tissue that surrounds your vagina, also known as the vaginal corona, and may partially cover it without obstructing the functions of your vagina. The elasticity means that it can stretch when you insert toys, a penis, a tampon or your fingers. It’s also able to stretch, so you’ll get your period normally.

A healthy hymen varies from woman to woman, which means your hymen may have more tissue than your friend’s hymen. Hers may be more elastic. No two hymens are the same. That puts the damper on the idea that you can determine anything from a physical exam of the hymen.

If you want to get up close and personal with your hymen or even your vulva in general, which includes your clitoris, a hand mirror comes in handy! Pop a squat over it or sit and spread your legs with your mirror positioned in between it where you can view the mirror. Remember, you might not see anything that’s markedly a hymen, but you’ll know your body better!

Related: What Does a Normal Vagina Really Look Like

WHAT DOES THE HYMEN DO?

To be honest, we don’t understand what the hymen does. It can help to keep bacteria from entering the vagina in embryos, and we definitely don’t want any fetuses contracting an infection. But once you’re born, it doesn’t seem to do anything else. The hymen could simply be a remnant of the vagina’s development in utero [6].

Maybe vaginas would remain fully functional if women didn’t have hymens. We just don’t know yet. We can’t fully figure out what the function of the hymen is.

WHY DO WOMEN BLEED DURING SEX, THEN?

Beware that a hymen can tear, but it’s typically not a good thing. If your hymen tears (and this isn’t the proverbially cherry “popping”) and this leads to bleeding, you’re probably not doing sex in the most comfortable or healthy way.

This poses a Catch-22. If you think having sex for the first time will hurt and you’ll bleed, how can you possibly be relaxed enough to minimize vaginal trauma? There is some good news, however. One study found that 63% of women experienced no pain or bleeding the first time they had vaginal intercourse [7]. We hope that puts your mind at ease.

And if you’re experiencing pain during sex at any time, there are things you can do. Discover the 7 causes of painful sex and ways you can make it feel better.

AVOID BLEEDING WHEN YOU LOSE YOUR VIRGINITY

We’re not here to tell anyone not to lose their virginities. In fact, at the Princess Fantasy, we think every Princess deserve to have an awesome sex life, and we provide advice to back it up.

If you’re not sure whether you are ready to lose your virginity, read this post. If you know you’re ready, then read on.

Bleeding during sex happens because your man is too aggressive. Perhaps he’s thrusting too fast or too hard. Even if you like the way it feels, the best way to deal with that is to use lube. Personal lubricants make everything slicker and, no, needing to use them doesn’t mean there’s anything wrong with you.

Related: What Is Lube and Why Should You Use It

Of course, you can always ask him to slow down (having trouble asking this? Learn how to talk about sex), and slowing down, in general, is good for your sexual encounters. When you don’t rush into penetration, you’ve got more time to truly relax your mind and body. Your body will be more receptive to penetration, which can help if you find sex uncomfortable.

The more aroused you are, the better sex feels and the easier it will be to orgasm. To this end, you can’t go wrong with foreplay. Read: 22 foreplay tips and ideas for intense sex.

When relaxing is especially problematic, we recommend a sensual message to relax your muscles and get your head into the game. Of course, receiving is also excellent, but you might find it helps you connect more with your partner when you physically place your hands on his body to give him a massage.

Similarly, don’t place undue significance on whether you have a hymen or whether it “breaks” and bleeds during your first time having sex. As we’ve discussed, bleeding during sex is usually a bad thing, not something to be desired. And you can have an elastic hymen that allows losing your virginity to be pain-free, even pleasurable!

Now that you know the truth about what the hymen is and what it does, you can combat any misinformation you might run into.