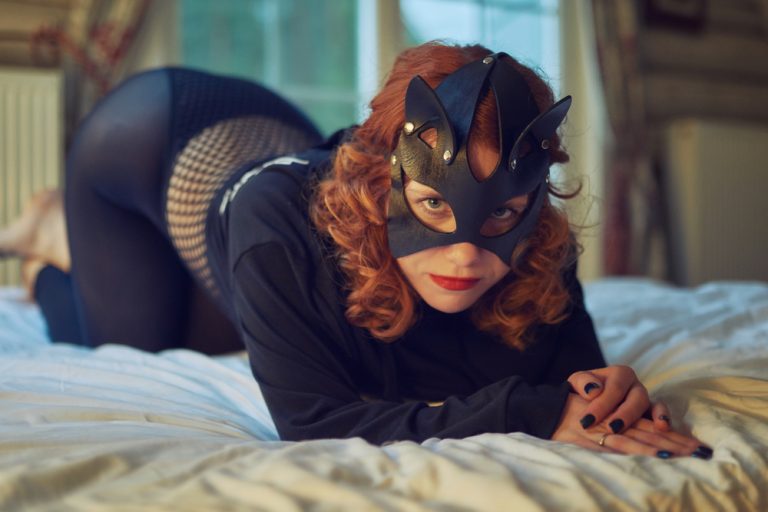 Pet play is a specific type of roleplay (get inspired to role play with your man) where a person acts and usually dresses like a specific animal. It’s common for the submissive to roleplay an animal and wear the accouterments that go with it while the dominant is the owner or trainer. Animal roleplaying is typically done within an erotic power exchange relationship (discover how to have a functional D/s relationship). You might enjoy some of the accessories and tools for animal play when you’re going solo, but it’s easier if you have someone who acts as trainer or owner.

Similarly, if you’re dominant, a submissive helps you fulfill your desire to “own” your pet, and you can guide them how you see fit.

Read more: How to Dominate Your Man

The main types of pet play include:

You’ll find the most information and products available to these specific types of animal roleplay. Each comes with some general personality expectations. Ponies (known as ponygirls or ponyboys) love showing off and are highly trained, puppies are playful and can learn simple tricks, and kittens are affectionate and often sleepy.

However, there are other types of pet play too (wolf, fox, rabbit and even pig accessories exist), that you can try and find accessories for. You may just have to be a bit more creative to make it work.

Each type of pet play comes with specific expectations. For example, you might expect a puppy or kitten to be loving and cuddly but also playful — and potentially naughty at times! Pony play incorporates more elements of manual labor and sometimes a horse’s lack of peripheral vision, which is aided by accessories.

We’ve mentioned accessories for pet play, but what exactly does that mean? Many people who engage in pet play use costumes and accessories, which help them get into and stay in their roles. These items may also serve to keep someone in bondage,  and this may be directly inspired by items that keep animals in bondage.

Some items that are common across the various forms of pet play include collars,  tails (often butt plugs with appropriate animal tails attached), and ears. Protective wrist guards and kneepads can be worn by any animal who is walking on all fours.

Puppy and pony play also have some specific accessories. There are generally fewer items for kitten play. Mittens/paws are one option, and metal claws sit on fingers of mischievous kittens.

As you can see, the list of possible gear (also known as tack) for pony play is quite extensive and can be rather expensive, and unlike other types of pet play, all of it is based on actual horse gear.

But no matter what type of pet play you’re into, you get to choose the level of bondage with which you are comfortable. If a puppy wears a full bodysuit with a harness on top of it, he’s pretty well bound. A hobbled horse is far more restricted than a kitten who only wears ears, a tail, and a collar.

Any of these things can be combined with regular cuffs and specialty items such as shoe locks, which are ankle cuffs that keep a person locked in high heels. Extreme bondage isn’t a necessity with petplay, though. It’s just something that some people enjoy.

Read this post if you want to know more about bondage devices.

Animal roleplay combines training, bonding and sometimes manual labor. The specific scene and type of pet play dictate behavior. Purring, meowing, barking, biting, scratching are all behaviors that a pet might exhibit. Kittens might drink milk from a bowl, curl up next to their owner’s feet and groom themselves.  Puppies may fetch or walk on a leash. An owner might keep a pet bound or in a cage while engaging in acts of sex and discipline.

Pony play is usually the most involved, and ponies fall into specific categories:

Petting, cleaning, and brushing are all types of grooming that can happen during a scene. Grooming a pony is more involved than a puppy or kitty, but you can bond with any pet by grooming them.

Pony grooming specifically calls for tying your pony and flicking a stiff brush across your pony’s body. Move on to a softer brush with smooth constant pressure. Gently brush the pony’s mane/hair to avoid damaging it. The tail receives similar treatment. Note that butt plug tails may pop out if you brush vigorously.

Wiping down a pony with a soft towel is a great way to begin or end a scene.

So you’ve got your gear and tools of torture. What next? You train.

Training is about teaching your pet what you expect when you say a certain command. You might train your dog to sit, stay, rollover, or fetch. The same goes for animal roleplay; although, your human pet understands more nuance.

Examples of training can include walking on a leash (leading), sitting in a pose, walking in a certain manner, tying (where your pony remains tied while you work on him), housebreaking, and doing chores. You’ll find examples of common commands for kittens (sit pretty, paws up, expose, belly up, knead, crawl, hunt, groom, etc.) puppies (present, kneel, all fours, away, down, mount, kennel, snuggle, stand, stay, up, watch) and ponies (whoa, walk, trot, gallop, canter, back, easy, stand, wait, etc) on websites dedicated to pet play. Ponies can also respond to sounds such as clucking or kissing to move faster.

You give your first command, allow your pet to do what he thinks you mean. Then, correct his posture or behavior, so it meets your expectations. Some instructions require more practice than others.

The owner must teach each of these activities to be completed to the trainer’s expectations for the pet to receive a reward. The more specific your commands, the easier it will be for your pet to understand them, learn them, and repeat them.

A good pet earns treats (sex and affection may be considered such a treat), while a bad one receives punishments. Caging or confinement is one method of training and discipline that we’ve already touched on. You can purchase cages large enough for a person, but you must take care to keep safety in mind. Bondage or confinement in small spaces, especially for long periods of time, can lead to cramps or injuries (nerve, joint, and tendon damage, among other potential risks) as well as emotional trauma.

Done right, a pet can be confined to a crate overnight, but the pet must alert the trainer if they need to use the bathroom or if there is a cause for concern.

Although you might focus on punishment as a negative, it’s actually the positive reinforcement and feeling of being cared for that attracts many people to play the role of the pet. Being a pet is one way to let go of everyday stress and responsibility. However, discipline and training can also incorporate humiliation and degradation, both of which are kinks for some people.

Training pets and teaching them tricks helps reinforce the role. For example, you might train your kitten to eat from a dish. Remember to keep safety in mind and only feed your kitten human food as pet food is not safe for human ingestion. Tuna, milk, and soup are great for eating from bowls, and you can use cereal as kibble or small crackers as treats.

However, just like real pets, it’s love and affection that a pet desires more as reward for a good deed. Sexual favors also serve as a reward during pet play. Pets who are especially well-behaved or attractive are perfect for showing off at parties or clubs (another trainer can test a dog’s skills or ponies might compete, for example). Although, you should be careful about public exhibition which might make strangers uncomfortable or even be against the law.

Of course, you need a partner to create a contract together. Finding a partner for pet play may be easier than you think, however. You can put ads on Craigslist,  log on to social networks such as Tumblr or post on FetLife and other adult/sex websites to find partners who are interested in pet play. Finding someone who is interested in the same sort of pet play might be more of a challenge, though.