POLYAMORY VS POLYGAMY: THE DIFFERENCES EXPLAINED IN DETAIL

If you have a TV or an Internet connection, you’ve probably heard of shows like Sister Wives. Unless you’ve got ties to a fundamentalist religion, you might not have realized that such relationships exist in the modern day – but they do! 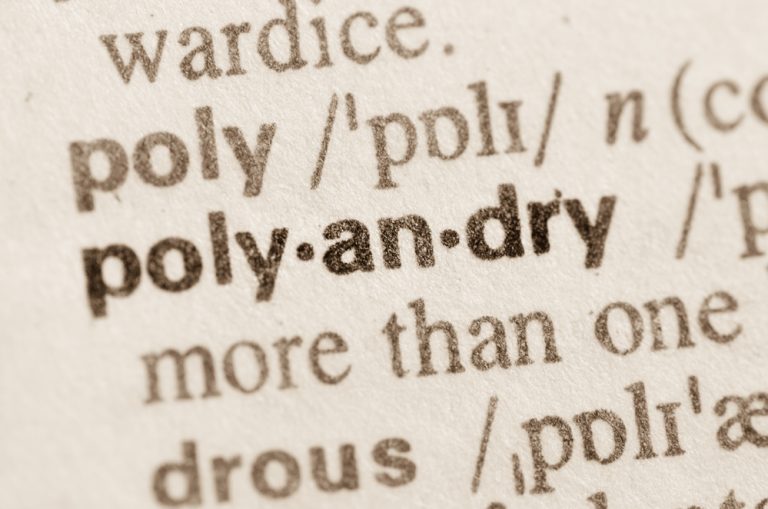 Definition of word polyandry in dictionary

Now that relationships like these are on everyone’s radar, more people use words such as “polyamory” and “polygamy.” But not everyone uses those words correctly. Read on to learn the difference between polyamory and polygamy.

HOW POLYAMORY AND POLYGAMY ARE ALIKE

It’s not just a question of polyamory vs polygamy. There are some similarities, which lead to confusion. Here are just some of the ways these relationship styles are alike.

But the similarities end there.

Polyamory is all about having multiple romantic relationships with other people [1]. These relationships can include sex (after all, making love is a great way to remain emotionally connected. More on that here), but they don’t have to. The focus is the long-term, romantic connection [2].

An open marriage is like polyamory; although, open marriages tend to focus more on the sex. Discover more about open marriages. Swingers may also consider themselves polyamorous, but this isn’t consistently the case.

There’s no perfect polyamorous relationship model. One difference between polyamory and polygamy is that in polygamy, it’s usually the man with multiple wives. This isn’t the case with polyamory. Another difference is that polyamorous people may not necessarily be married to any of their partners.

You might be poly in a relationship with a man who isn’t. But he understands that you feel capable of loving more than one person, so you also engage in a relationship outside of this. It helps if he feels compersion. Learn more about this.

Or both of you may maintain more than one relationship. Your partners don’t interact or have sex with each other. But a relationship between three (or more) people also counts as polyamory. Some people also describe these relationships as poly-fidelitous, which means they love multiple people in a committed way.

You might be straight, bi or gay. That doesn’t necessarily play into being polyamorous. Psst, wanna know if you’re gay? Click here.

Polyamorous folks may have more than two relationships! But they tend to prioritize those relationships as primary, secondary, tertiary, so on and so forth. Typically, a primary relationship is seen more viable in the long term [3], and it comes before other relationships.

HOW IS POLYGAMY DIFFERENT?

Polygamy specifically refers to being married to one person legally (also known as plural marriage) while maintaining other marriages/relationships outside of the law. These types of relationships are the ones you see on TV. Kody and company in Sister Wives are polygamists. The fact that marriage is involved makes it polygamy.

Many people use the word polygamy, which does include any multiple marriage, but the legal term is bigamy. So when you ask about polyamory vs polygamy, you might be using the wrong words! The law comes into play because you cannot legally marry multiple people, which is why it’s so unusual for reality TV stars to be open about their lives.

In polygamy, you typically see one person with multiple spouses, and it’s usually the husband. This particular form of polygamy is known as polygyny but, again, many people use the terms interchangeably….and yes, all these very similar words are incredibly confusing, but get ready for more!

In fact, many people see polygamy as sexist because of this. Why can’t a woman have multiple husbands, after all? If you think having multiple husbands is the only way for you to go, then you’re all about polyandry or one woman with multiple marriages.

Regardless of genders, the spouses may interact and even live with one another to help raise families. But they don’t tend to have romantic or sexual relationships (there are a few exceptions, of course). Their relationships are more sisterly than anything else; hence the term “sister wives.” There is often a ranking of sister wives [4].

Like polyamory, most polygamist spouses are knowledgeable about the other spouses. But sister wives aren’t allowed to have their own outside relationships. Seem a little unfair, doesn’t it?

In the past, polygamy helped to maintain population numbers in communities. Currently, many of the polygamists in the world subscribe to such a lifestyle because it’s a tradition of their fundamental beliefs. Kody from Sister Wives, for example, is a member of the Fundamentalist Church of Jesus Christ of Latter-Day Saints, or FLDS (members of this church call themselves Mormons). Some Muslim men also practice polygamy (they’re usually allowed up to four wives [5]), and the United States has fundamentalist Christians who also believe in this practice.

In these arrangements, men rule their households. Wives might be as young as teenagers. The wives may lack autonomy and may not be able to leave the marriage if they want to.

However, not every Fundamentalist Mormon is involved in polygamy (even some of Kody’s own children prefer to be monogamous), and the same is true for the many Muslims who prefer monogamy. In fact, some branches of these religions specifically frown up polygamy as a modern practice.

There are also those people who practice polygamy from something other than a religious view. These communities are often closed, potentially sects or cults, where the leader has multiple wives.

HOW TO MAKE ANY POLY RELATIONSHIP WORK

Now that we’ve emphasized the difference in polyamory vs polygamy, we have a little advice for anyone who wants to try out these different relationship models. Because even when they differ from one another, the people who live these relationships have to make some similar sacrifices.

Related: 4 Options to Consider When Your Man Cheats

What have you learned about polyamory vs polygamy? Although similar, they’re definitely not the same thing. And while obtainable, these relationships certainly won’t work for every couple!