We’re going to show you exactly why women cheat (and stay faithful). You may not want to hear all the facts, but it will help your to either strengthen your relationship or move on. While cheating is relatively common, that doesn’t mean it’s easy to handle or move forward from. Cheating can lead to breakups, divorce, emotional strain and other difficulties. Having a partner cheat can be devastating. After all, it is known as a betrayal. It can lead to a lack of trust and reduced feelings of self-worth. 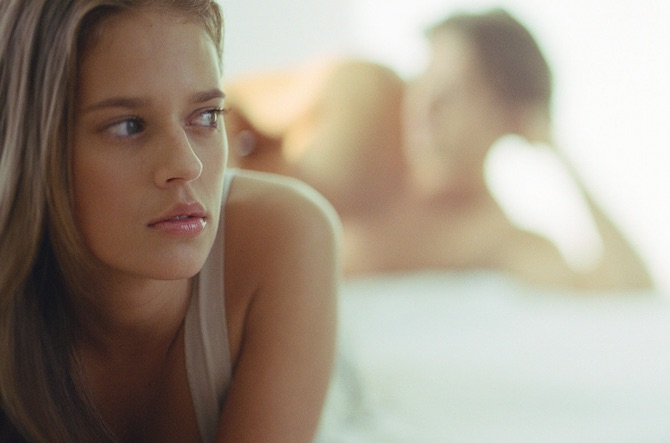 For men and homosexual women, it might be helpful to understand why their female partners cheat. Are there certain factors involved? Is it possible to prevent cheating? And if it does happen, how do people get past it?

Before going into a discussion on cheating, it’s important to identify exactly what cheating is. Yet that could be a problem. The thing is, not everyone agrees on what constitutes cheating. Ideas can vary from person to person and within different cultures [4].

Some men might think their female partner has cheated on them if she has kissed someone, flirted, had sexual thoughts about another man, or in our age of technology, texted, called or sent naughty pictures to someone. At the same time, not everyone will agree that these actions constitute cheating. Some people would only think of a physical affair as cheating, while others view an emotional affair as a betrayal as well.

This is because emotional affairs establish intimacy between two people. Read more about intimacy.

Many would only consider behavior cheating if it went into physical sexual contact – going “through the bases.” At the very least, most people would agree that intercourse – going “all the way” – is considered cheating.

Related: What Are The Bases: The Vital Info

Also, there are the considerations of how many times the cheating has happened. If it was a one-time thing, many people consider it a mistake, whereas an ongoing affair is truly thought of as cheating. Other people would consider just one time enough.

Ultimately, it’s smart for the partners within a relationship to decide on their definitions of cheating within the relationship. That way, there is less of a risk for misunderstanding and both parties are on the same page [5].

Learn how to define cheating and set boundaries.

Do men and women feel differently about physical versus emotional cheating? One study supported the commonly thought idea that women care more about emotional affairs than physical ones. The idea is that women become worried about how stable the relationship is and whether resources will be taken away when the man is cheating emotionally, which could indicate love and the consideration of him leaving the relationship, than when a man is cheating physically, which may not make him leave the relationship. Research has found a smaller majority of men who are more concerned about physical than emotional cheating in their female partners.[6].

WHY DO WOMEN CHEAT?

While individual women could have their own reasons for cheating, there are some patterns that tend to account for most cheating by a female. One study that looked at factors in cheating found that main reasons included the basic idea of low levels of happiness in a relationship, as well as not having enough compatibility on “sexual attitudes and values.” The study found that women were more influenced by relationship factors than by demographics. Nonetheless, they were also affected by their sexual personality characteristics [7].

While trying to figure out why women cheat, you should also bear in mind that people with more attachment anxiety have been associated with a higher risk of cheating [1]. Attachment anxiety is an insecure attachment style that goes with the idea that the other person is not as available to them. They are then likely to behave by this idea.

Also, research has supported the idea that women within certain populations are more likely to cheat than others. Two groups with a higher likelihood of cheating are upper-class and unhappy women [8].

Read a story about one woman who cheated.

College-aged students had higher than normal levels of cheating in one study. This study focused on Northern California, finding that over 60 percent of the students had experienced a sexual form of cheating. It discovered that females and males were both just as likely to cheat sexually, whereas males were more likely to view cheating favorably than females [2].

In the college student population, a study found that personal factors were the main factor for cheating rather than situational factors. These personal factors include aspects like maximizing, selfish behavior and avoidant attachment, which is another type of insecure attachment style [10].

Having a college degree didn’t have an effect on cheating for women in one study, while it found women are slightly less likely to cheat when their husband has a degree. Also, being religious somewhat lowered the chance [8].

A review of different surveys and data found that relationships, where the partners live together without being married, do not have stable arrangements, which can affect their lives in many negatives ways, including concerning cheating. The review found that cohabiting relationships had a higher likelihood to include infidelity compared to married ones.[11].

There tends to be a lack of information about cheating and why women cheat in homosexual relationships, so it is unclear whether cheating might be higher, the same or lower in lesbian relationships compared to heterosexual ones [12].

A study of married American women found to have a higher probability of cheating in:

The probability went down in religious women, with increasing age and with higher education levels. This study did note that there has been some inconsistency among studies when it comes to demographics and likelihood of cheating [3].

Another factor that can encourage cheating is when someone is economically dependent on her spouse. This is the same for men relying on their spouse for financial purposes. According to a study, feeling dependent and not basically equal in the partnership increases the likelihood of cheating. Related, women contributing significantly to the family income reduced the likelihood of them cheating. They are actually least likely to cheat when they are the primary breadwinner, yet that increases the male partner’s likelihood of cheating [13].

IS IT POSSIBLE TO PREVENT A FEMALE PARTNER FROM CHEATING?

Is it hopeless? Do heterosexual men and lesbians need to accept that their female partner will cheat on them at some point? The answer is no. Not everyone ends up cheating. While it might seem like some people are just prone to cheating while others aren’t, in reality, there are certain things that can be done to reduce the likelihood of having a female partner cheat.

Not everyone who cheats once will cheat again, either. Learn more about repeat cheating.

We saw above that dissatisfaction with a relationship is one factor that can lead to cheating. Therefore, working to create a close and meaningful relationship could reduce the urge to look elsewhere to fulfill needs and find happiness. Behaviors that could make a difference include paying closer attention to what she says, taking time to do activities she enjoys and asking her about her needs in a relationship.

Those who are in a communicative relationship could talk to their female partners about “perceptual downgrading.” This technique helps women – as well as men – shift their perspective to see a person other than their partner as less attractive [17]. This tends to happen subconsciously when the person is in a relationship, yet it might be possible to consciously achieve this effect as well.

HOW TO GET PAST CHEATING

In some cases, you’re better off ending the relationship. Get tips for breaking up.

Women who cheat can have different reasons for doing so, but it often comes down to unhappiness with the relationship, certain demographics and looking to men who seem like strong candidates for procreating. When females cheat, their partners have a few options for handling the situation. They can decide to end the relationship or continue the relationship on a trial basis to see if it will work out. Otherwise, they can decide to practice forgiveness and to continue with the commitment. Research has found that forgiveness is more likely to happen when the cheating person apologizes, especially when it is a meaningful apology with remorse and a desire to heal the relationship [20].

FAQ #1: Does a woman’s biology affect whether she cheats or not?

It is thought that much of why women cheat is related to procreation on an instinctual and biological level. In other words, she may not realize that this is why she is cheating, but her body may be encouraging her to stray with the goal of conception.

When women are at the point in their menstrual cycle when they are the most fertile for conceiving a baby, they are actually more likely to cheat. In a common sense way, this makes sense since women’s bodies are telling them to try to get pregnant.

A study from UCLA and the University of New Mexico backed this idea up with research. It found that ovulation increased certain feelings in women that could encourage cheating; these included feeling “more desirable, attractive and powerful in their relationships.” A key finding was that women in certain types of relationships were more prone to cheating. When women found their male partner suited to a long-term relationship yet lacking in attractiveness, they had an increased likelihood of looking to men they found more attractive during ovulation compared to the women who found their partner attractive.[14].

A second study by the same UCLA and University of New Mexico researchers supported the first, showing that the female participants had a higher likelihood to fantasize about other men during their fertile time of the month when they weren’t especially attracted to their partner [14]. Further research has additionally backed up the link between looking at other men more during ovulation when the female’s relationship is more about security and similar functions than about attractiveness [15].

As another aspect, a woman may decide to cheat with a man who she deems would have the ability to procreate physically and who would be able to support the family on a socioeconomic level – the other man is seen as having better genes. Because of this, the likelihood of a woman having had an affair peaks at the age of 45 since that is around when women start to end their childbearing years [8].

FAQ #2: Does a Woman’s Attractiveness Have Anything to Do With Cheating?

A woman’s attractiveness can affect her likelihood to cheat if she feels confident in herself. A Rutgers University study found that women who were more satisfied with their own bodies was one reason why she would cheat, especially when they were unsatisfied with their partner and/or their relationship. The researchers noted that it seemed these women did not choose to cheat to improve their self-worth but rather to find someone who made them happier [16].