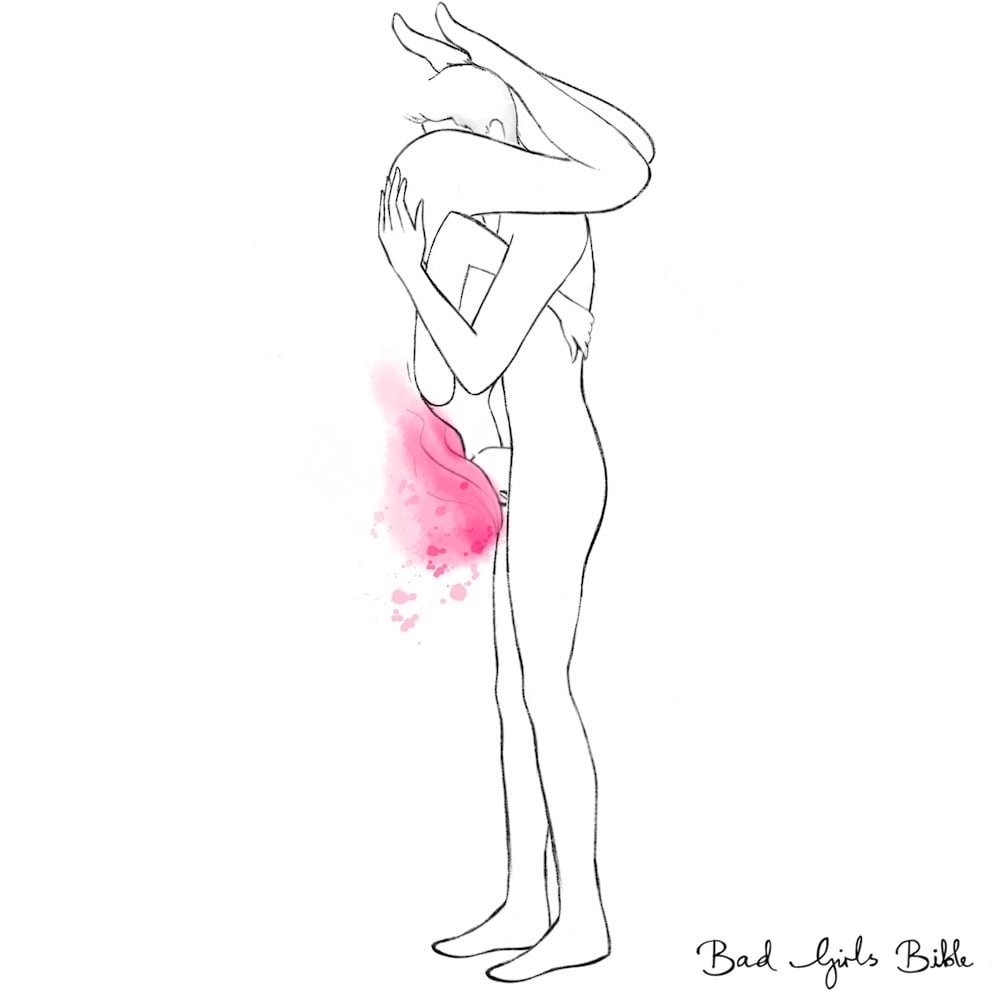 The standing 69 sex position is a very exotic one. It’s not intended for most couples as it’s just so difficult and tiring to perform. But if you can pull it off with your man, then you are going to have a lot of fun. Before you even attempt the standing 69, you need to make sure that both you and your man are strong enough to do it. Otherwise, you might stick to some of the other ideas from our sex positions guide, which has over 100 positions!

Your man is going to be carrying all your weight, while you are upside down. In general, you man needs to be quite muscular to perform it, while you need to be quite small, otherwise you will put a massive strain on his back and neck.

To start off, I recommend that your man lies down on his back on the bed, with his feet over the side of the bed so that they are touching the floor. You then need to get into the regular 69 position on top of him. When you are in the 69 position, make sure that your legs are quite close together so that they are practically squeezing your man’s head

The first test (before he tries to stand) is to see if you are both able to perform it while your man is simply sitting upright on the bed. So your man needs to sit up. He will need to use one hand to push himself upwards, while using his other to steady himself. Meanwhile, you need to keep your legs wrapped around the back of his neck and arms wrapped around his waist to keep yourself in position and to prevent yourself from sliding down.

WHAT THE GIRL DOES IN THE 69 STANDING POSITION

When you are in the standing 69 you will be doing quite a lot of work just to keep yourself in position. For most girls, that’s the main thing that they concentrate on.

I always recommend that you start the standing 69 from a seated position and try it out there first for a minute or two to see if it’s comfortable before your man sits up. When you are upside down, it’s going to take a little while for you to get acclimatized. Rather than taking your man’s penis right into your mouth to give him a blowjob (tips here), you should try licking it and kissing it and only take the tip of it into your mouth. This is because you won’t have your arms free to help you control how deep you take it.

Once you are comfortable trying the standing 69 from a seated position, it’s time to try it with your man standing.

WHAT THE GUY DOES IN THE 69 STANDING POSITION

Your man should first and foremost concentrate on keeping you standing and making sure that he stays steady so that neither of you hurt yourselves. Like I already said, he should try the standing 69 with you first from a seated position and then afterwards from a standing position. Your man needs to be careful to make sure that you don’t slip too far downwards. He can do this by reaching down and holding you by your shoulders.

When in the standing 69, he just needs to slowly lick you out using his tongue. Broad, soft strokes are best for this. He doesn’t need to perform any ‘crazy’ moves on you as he needs to concentrate more on making sure he has a firm grip. This is definitely a type of sexercise (you can find more here).

THINGS TO CONSIDER WHEN PERFORMING THE STANDING 69

I only know a few people who have actually tried the standing 69. Here is what they had to say about it:

Read about more 69 sex positions, too.

I personally see the standing 69 as more of a novelty sex position like these crazy positions, than one for you to get a lot of enjoyment out of. However, if you find that sex is getting boring for you and your man, the standing 69 is a killer way to make it more exciting again. While a lot of couples don’t actually get a ton of enjoyment out of it, it’s so different, exotic and ‘out there’ that it can just be really refreshing.