Your favorite love stories probably don’t give you a full idea of the stages of relationships. In fact, many of them seem to end at the first kiss or when the couple finally gets together. But that’s only the first stage or two in a relationship! In a real-life romantic relationship, there are at least five stages that you’ll go through; although, shorter relationships won’t survive all these stages. 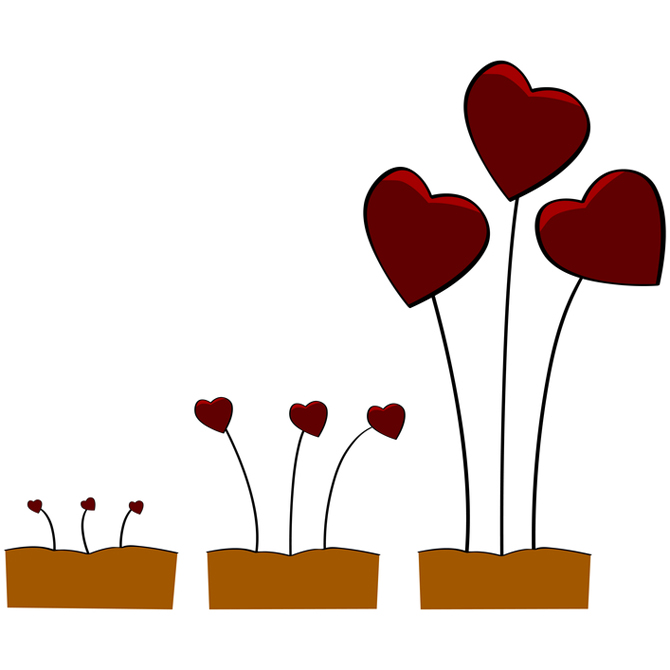 THE 5 STAGES OF RELATIONSHIPS

Many relationship stage theories are built on a pyramid, much like Maslow’s hierarchy of needs. This is because you must establish each level of the pyramid, which is equated to a stage in the relationship, before moving on to the next level/stage. That is, as long as you want your relationship to be a successful one! These stages of a relationship correspond with time as well. Obviously, you will – or should! – get to know one another first before you commit.

Somehow, someway, this person enters your radar. Perhaps you meet at school or work or during an event with a common friend. He might be working behind the register at your favorite store, the waiter where you had lunch or someone whose profile you saw on Tinder or OkCupid. The how doesn’t matter as much as you know the other exists now.

And you’re attracted to him. There’s physical attraction, but maybe you find yourself blushing when he flirts and flirting right back. At this point you don’t know much about him, but that doesn’t matter. You look for signs that he feels the same. You sure hope he does! But if he doesn’t, there isn’t much as risk other than some hurt feelings because of rejection.

It’s common for you to overlook his flaws and focus on the positive, perhaps to the annoyance of everyone around you. It’s okay, though. We’ve all been there! This is in part due to oxytocin, a chemical in your brain that is on overdrive when you’re falling in love with someone and after activities such as sex and love.

These feelings will increase as you get to know each other in the following stage of a relationship.

2. GETTING TO KNOW EACH OTHER

Once initial attraction has been established, you’ll move into the next stage of a relationship. You’ll tell each other about your preferences, families, hopes and dreams, pasts and favorite movies and songs. This may take place over dates, long conversations well into the night or even via text if you’ve met online. You may not exactly be on the same page with this guy, yet. You may pursue him and he retracts a bit, or the opposite may also be true.

This is the stage that Hollywood often seems to focus on. It’s romantic and it helps establish whether there’s anything more than your initial attraction. Everything is new enough that it seems like nothing can go wrong, but that can’t last forever. That’s why some people call it the “Honeymoon stage.”

For instance, you might ignore big-picture differences because you’re so infatuated, which means you won’t really be able to move your way up that pyramid. Furthermore, in this relationship stage, the focus is on presenting the best possible version of yourself, so you might feel like you can’t truly be yourself yet.

After a few months, you’ll encounter the next stage of a relationship. This is one of the more difficult stages of a relationship, or should we say this is when real life sets in? Everything can’t be coming up roses forever, and you’ll start to learn it. Those lessons may be harsh as you feel exhausted from trying to be the best you that you can be or as you settle into the daily grind and your rose-colored glasses wear off. One or both of you may be trying to test the other’s commitment to the relationship, causing these conflicts to arise due to clinginess.

You may suddenly see things about your partner that you realize you don’t like, or your different goals, values and priorities may make you feel stressed. Perhaps one of those big-picture issues that you were denying suddenly rears it’s ugly head, and you find yourself fighting over one of you moving to the big city for a job. In fact, many couples find themselves back at this relationship stage when life changes happen. If you’re moving in together or moving away together, having kids, switching jobs or going back to school, getting married or have experienced a breach in trust such as cheating, it’s normal to wind up back at the conflict stage.

Whether conflicts arise a few months in or it takes a few more years, healing is necessary.

Resentment can also build if you respond to conflicts by trying to control your partner or acting like his parent. No matter what, fixing these problems sooner is better than waiting because they won’t resolve themselves.

If you’re arguing because you’re testing one another or if you’re dealing with baggage from a previous relationship, it’s time to discuss those things. It’s time to take off your mask and be yourself, for better or for worse. Sometimes a relationship just can’t recover from conflict. For example, you may choose to divorce rather than reconcile if one of you had an affair. This article can help you learn when to break up.

5. BUILDING HAPPINESS AND INTIMACY FOR THE LONG HAUL

This is the relationship stage is the one that everyone desires to reach, but few people get there. After all the other stages, you remain attracted – both emotionally and physically – to one another. You commit to one another and you learn how to navigate conflicts so they don’t become a deal-breaker. You feel confidence in your relationship. However, you don’t want to become so confident that you stop trying to show your partner that you love him. More on that here. This can push you back toward conflict.

This paves for way for a strong foundation, and you work in sync rather than against one another. Couples who have achieved this stage may seem like they’ve also been a well-oiled machine, but they may have dealt with some serious conflicts to get to this relationship stage. These couples communicate so well that they seem to reach the other’s mind. They know what the other is thinking and feeling without needing to say it, it seems. But there’s a lot of hard work that has gone into – and continues to go into – the relationship to make it work.

AT WHAT STAGE OF A RELATIONSHIP DOES EVERYTHING GO WRONG?

These relationships stages may look familiar to many people, but remember that there is overlap. And if your relationship moves especially fast, you might not notice a particular stage. Plus, this is just one of many theories when it comes to relationship stages. For example, eHarmony’s vice president Jeannie Assimos outlines just three stages in a relationship: romantic love, realistic love and mature love.

One thing seems to be common among all of these theories, however. If your relationship is mean to last ten, twenty or even more years, you’ll come to a stable place where you find balance between the burning sort of love and attraction you feel at the beginning and a foundation of mutual trust, admiration and respect. While we absolutely recognize how important sex is to the survival of a long-term relationship, that lust alone cannot sustain a relationship. A lack of true intimacy and trust within a relationship often leads to that relationship’s painful implosion.

This often happens when your relationship moves too fast and you skip the essential steps where you build rapport and trust with your partner. If you move in together too quickly because of financial reasons, for example, you might find yourself playing roles similar to that of husband even wife, even if that’s not where you are emotionally. Resentment can build, and you may find yourself in many tearful fights because you didn’t establish the

But a lack of intimacy doesn’t just occur when you’ve failed to reach it in the first place. Making it to this final stage isn’t enough to stay there in all cases. Mature love and intimacy can be broken down gradually by the day-to-day humdrum. You’ve got work, school, kids, a house to take care of, aging parents to look after and a million other tasks that require more hours than there are in a day. It’s easy for distance to build in a relationship because of these factors. And as you age, you might find yourselves drifting apart rather than growing old together.

You might forget to take time to check in on your relationship, if you even have the time or energy to do so at all. That’s why it’s crucial to ensure you’re also taking the time to communicate with your partner – sexually and otherwise – and making times for dates (ideas in this post) and to spend one-on-time time together without kids, friends or other obligations. You may have heard people talk about the “Seven Year Itch” or other cliches that say a relationship is bound to fail after it reaches a certain age. There’s no truth to those numbers, but you can take your partner for granted after seeing them after day for years.

This can be especially true in the digital era, when our phones, tablets and other devices connect us to the world 24 hours a day. If you forget to turn down your ringer and put your phone down, you can miss out on precious moments with your partner who is standing right in front of you. But even without those distractions, it required a conscious effort from both people in a relationship to move through the relationship stages in a healthy way and to ensure they didn’t miss a step.

Recognizing these stages of a relationship might help you make more productive decisions for the longevity of your relationship, allowing you to work smarter and not harder, as the saying goes!