THE 9 SIGNS OF INSECURE MEN, AND WHAT TO DO NEXT

Insecurity can happen for a lot of reasons, and many of them are understandable. Perhaps he was never as close with one or both of his parents as he would have liked. He may have been the victim of abuse or bullying, especially if he didn’t fit the typical masculine stereotypes as prescribed by society. He may feel like many people have abandoned him over his life. This can also lead to intimacy issues. 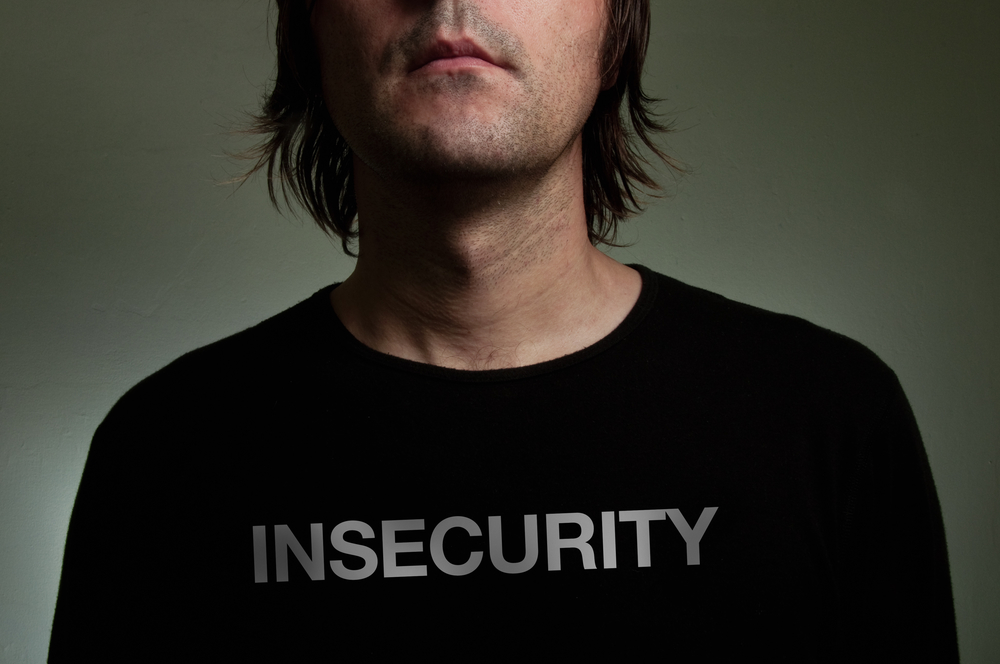 When you add in previous relationships, which may have ended badly or involved cheating, he’s bound to get more insecure. But many people have faced adversity, and it’s not healthy to let it make you so insecure. Few relationships can survive that sort of struggle, either. If your man displays many of the signs below, he may be insecure.

1. HE WANTS TO SPEND ALL YOUR TIME TOGETHER.

While this is normal when your relationship is new, it’s normal for established relationships to cool off a bit. In fact, it’s healthy for you to spend time alone or with your friends and for him to do the same. Otherwise, you could become codependent. Learn more about stages of a relationship here.

This can lead to him demanding that you spend time with no one else but him, throwing fits when you try to make plans with other people and finding ways to control your time. He may ditch his own friends, pick up all your hobbies and become a ghost of his former self if he’s insecure.

If you do manage to do anything without your insecure man or even if you’re not doing something specifically for him, he’ll make you feel guilty.  He may try to get something in return for what he is “letting” you do, or he may even try to paint you as the bad guy who is not thinking about the relationship. In reality, it’s insecure men who are the ones who are selfish and not relationship-minded! A secure man wouldn’t freak out if you miss a call or text every once in a while.

3. HE INSERTS HIMSELF EVERYWHERE.

4. HE’S JEALOUS OF YOUR EX, MALE FRIENDS OR COWORKERS.

Jealousy isn’t a sign of a healthy relationship. More on that in this post. It is a sign of insecurity with your relationship, especially if you’ve given your man absolutely no reason to feel jealousy. Not only can he be jealous of time you spend with others – see above – but he’ll show jealousy at any man in your life. It could be your friend, your boss or a coworker. He may try to convince you that this guy wants to get in your pants or to steal you away, even if this would never happen in a million years!

5. HE ACCUSES YOU OF STRAYING.

An insecure man won’t just stop at convincing you that other men are out to get you. He’ll have convinced himself that you’re ready to do the straying. He might accuse you of ogling other men, flirting with them or even having an affair. He’ll looks for signs of an affair in everything you do and track your phone and Internet usage, which fits well with trying to control your time and the people you spend it with.

It won’t take long for you to get sick of this behavior. He needs you to tell him that he’s worthwhile because he doesn’t believe he is. He’ll want to know if he’s the best partner or lover you’ve ever had. He may ask directly if you are attracted to him, you think he’s good enough for you, you like the way he cooks or does something else. Or he may hint in an attempt to make you pay him those compliments.

Of course, you’ll compliment your man on things he does well in a healthy relationship, but he shouldn’t be digging for compliments all the time.

The old adage about how your bully is insecure rings true when that insecure man is your partner who does nothing but belittle you. It’s easy to take criticism to heart, especially when it comes from someone who is supposed to love and cherish you. But you’ll want to look outside yourself and see if his mean comments have more to do with his insecurity than they do with who you are as a person.

Insecure men will never be impressed by anyone else because they’re so concerned about their own shortcomings.

Perhaps he tries to tell stories that make himself seem cool or he is always complimenting himself in front of you and others. But these may not be signs of a healthy self-esteem. In fact, you can probably tell when he’s overcompensating and doesn’t believe the words coming out of his own mouth. But he’ll make a show of how great he is and how lucky you are to have him all the same.

You can easily tell if he’s got low self-esteem and his bravado is fake when you criticize him. Perhaps you simply want to point out a better way to cook or clean, but he’ll respond defensively no matter how gentle or well-intended your comments may be. Don’t be surprised if he tries to turn it around on you by pointing out your own flaws.

This trait of an insecure man is closely related to his inability to lose with grace. A sore loser might just have a temper, but it could also be a sign that he’s insecure, too. This extends to fights, where he’ll always have to have the last word. If he’s always competing with you or others, even to the detriment of your relationship, look for other signs that he’s an insecure partner.

HOW TO HELP YOUR INSECURE MAN

Even if you understand why you man is insecure, you have to do something about it.

Although an insecure man may not be abusive, there’s definitely overlap when it comes to these behaviors. Read more about that in this post. One thing that is often true in both instances is that you can never please your man simply by doing what he asks because he wants you to fail. It makes him feel better by feeding his ego. It doesn’t solve the underlying issue, however, which is why you’re not doing an insecure man any favors simply by being at his beck and call.

You may be able to help him in other ways, however:

Of course, breaking up shouldn’t necessarily be your first course of action, but it might be the only option if you realize that your man has a terminal case of insecurity. If other things on this list are true, it might be time to break up.It’s easy to think you can fix him, but you don’t need to settle for a “project” relationship. Read more about common types of relationships here.

Although the behavior of insecure men can seem flattering at first, especially if you’ve been neglected or betrayed by an ex, it can quickly lead to a partner who is too clingy and a relationship that isn’t healthy. Look for these signs of an insecure partner and know when you might be able to help – and how – and when you need to walk away, instead.