THINK YOU HAVE AN STD? KEEP CALM AND READ THIS NOW! 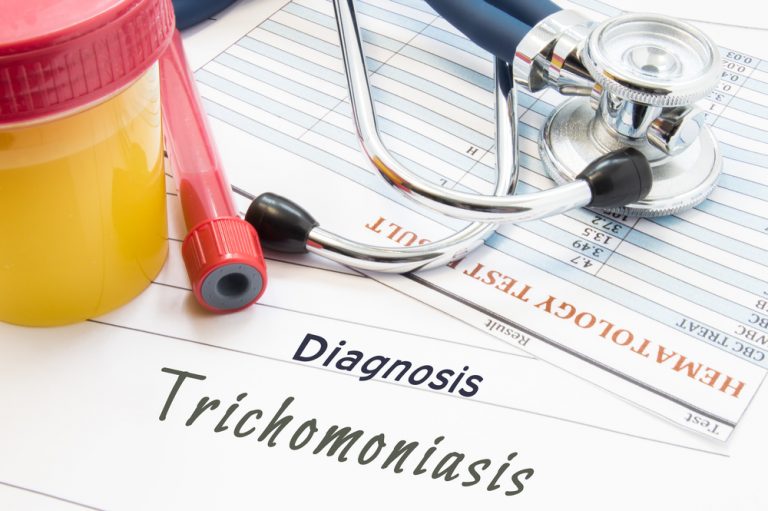 First, let’s clear something up. Many people now use the term STI, which stands for sexually-transmitted infection, to refer to infections, many of which can be treated. “Sexually-transmitted disease” is a bit old school; although, it’s still used. We’ll use both terms interchangeably from here on out.

HOW DO YOU KNOW IF YOU HAVE AN STD?

The following is a list of some of the most common STI symptoms and the STIs that present those symptoms [1] [2].

Note that while some symptoms show up within days, others take longer to appear.

NOT ALL STIS HAVE SYMPTOMS

Although you can tell pretty easily if you’re infection by looking for some STD symptoms, not having an STD symptom doesn’t mean you’re not infected. Some strains of HPV, for example, have no symptoms [11]. You may only find out you have HPV after an abnormal PAP exam or if symptoms of further complications such as cervical cancer arise [12]. This is why it’s so important to schedule regular PAPs. They may be the only way to know you have an STD.

Herpes may also not present with symptoms.

There are two good reasons that you shouldn’t freak out — including confronting your partner and accusing him of cheating — if you think you might have an STD.

Everything from a reaction to soap to a yeast infection can cause unusual symptoms around your genitals and even mouth. That’s why making a big deal about changes can lead to more worry and anxiety than necessary. Although it’s good to call your doctor to make an appointment for an STI screening if you’re worried, you should know the differences between some other common infections/conditions and STIs.

As you can see, symptoms alone are not how you know if you have an STD.

While both of these infections are treatable and generally cause no long-term negative effects (unless you refuse treatment for a bacterial infection and it leads to a more serious health issue), there’s another reason not to freak out because you might have an STI.

STIS ARE COMMON, MOST ARE TREATABLE, AND EVEN IF YOU DO HAVE ONE, IT DOESN’T MAKE YOU A TERRIBLE PERSON OR MEAN THE DEATH OF YOUR SEX LIFE

People used to whisper about the type of people, especially women, who had STIs. They were unclean, dirty, and too sexually promiscuous. But here’s the thing: STIs are more common than you might believe? HPV? It’s so common that the CDC says nearly every sexually active person will have it during their lives [14].

If you have sex, the chances that you ever test positive for HPV are extremely high (and only women are currently tested). It doesn’t make you dirty, and there’s no unsavory sort of person who has STIs. You probably know many people who have dealt with a positive STI screen; although, they’re unlikely to talk about it.

STI status doesn’t necessarily have anything to do with how promiscuous you are. You can contract an STI from a monogamous partner who got it from a previous partner. One study even shows that people who are monogamous have similar rates of STDs as those who practice consensual nonmonogamy because people with multiple partners were more likely to use condoms [15].

Unfortunately, some people discover that their partners are cheating because they test positive for an STD. If you think this might be the case, look for these signs of cheating.

Even if you do sleep with a lot of people, you can be smart about it! So, go ahead, be a slut if you want to. Call yourself one. Teach those people who slut shame a thing or two!

Know that having an STI doesn’t mean your sex life will suffer. You may have to use condoms and disclose your status to future partners, but many people with STDs enjoy an active and fulfilling sex life.

Even HIV, which was once known as a fatal pandemic, is no longer a death sentence; AIDS-related deaths have fallen 48% since 2005 [16]. If you were 2o-years-old and diagnosed with HIV since 2008, your life expectancy while taking modern medication has increased dramatically [17]. Many people with HIV live for decades, and advances in medicine mean couples appear to be able to have unprotected sex without spreading HIV [18] [19]. However, we always recommend using condoms and talking to a qualified doctor first if one or both of you is HIV positive before engaging in intercourse.

WHAT TO DO IF YOU THINK YOU HAVE AN STI

Okay, so we’ve described why you shouldn’t freak out if you think you have an STI. It might be nothing — or your new laundry detergent. But what should you do?

Call your doctor to make an appointment for an STD panel. You might contact a sexual health clinic specifically (think Planned Parenthood), your OBGYN, or your family doctor. This is a common medical service that they provide. Although HIV can take months to appear on a test, you can test for many STIs within a few days [20].

If cost is an issue, your state might provide coverage for family planning needs — including STI testing. Some states provide similar coverage, and many of them have expanded their coverage after the Affordable Care Act went into place [21].

Once you get into the doctor’s office, know what to expect. A typical weigh-in and brief chat with the doctor are normal. There are various types of STD tests, and no test can catch them all; although, some STIs will show up on multiple tests.  STI tests include:

A physical exam can also determine if you have sores or warts that are caused by an STD.

Some offices perform urine tests by default, so you may have to urinate before you even see the doctor. Drinking water beforehand is recommended.

You might want to ask for multiple tests to be safe. A urine test wouldn’t detect HIV, herpes or syphilis, for example.

Results can take days or weeks to come back. Try not to let yourself go crazy with worry!

Depending on your results, your doctor might want to follow up with a PAP exam and cervical swab or a blood test.

If you test positive for an STI, your doctor may prescribe medication. Antibiotics treat gonorrhea, syphilis, chlamydia, and trichomoniasis [23] [24] (as well as bacterial vaginosis). Medications help to suppress herpes outbreaks [25]; although there is no cure. There are also anti-retroviral drugs available to treat HIV [26].

Sometimes time provides relief. HPV has no cure, and infections usually resolve themselves [27], often within two years. Your doctor may recommend more frequent PAP exams to track changes of your cervical cells.

Another concern is contacting partners who may have been exposed to the STI. Depending upon the infection, you may want to alert partners even if you used condoms. HPV, for example, is transmitted through skin-to-skin contact, and condoms may not protect against it [28].

This definitely isn’t an easy conversation, but it’s important. An STI could affect your partner’s health or the health of their new partners. Your doctor can advise you on which partners you should contact. Typically, you want to tell any partners from the past few months.

Contacting former partners may be awkward, but wouldn’t you want the same courtesy? In some locations, the clinic might help contact partners [29]. ICASH in the UK is one organization that performs this task. Otherwise, it’s up to you.

Most people recommend informing partners in person, but that’s not always possible or advisable. Stay calm and stick to the facts. Something like the following should do:

I got the results of my most recent STI screening back and I tested positive for [STD]. You might want to get tested even if you don’t have any STD symptoms.

Don’t blame or accuse partners. It’s difficult to tell where many STIs originated, especially if it took a while for either of you to experience STI symptoms. You might even tell your partner that you don’t know when you contracted the infection. It can take weeks or even months for STI symptoms to appear [30].

People can have negative reactions to news like this, so having a few facts handy about the specific infection is useful. Partners might be angry and shocked; they may even say hurtful things or accuse you of cheating. Don’t demand a reaction if your partner needs time to process. Presenting facts may help you both feel better. The two of you might research questions online together.

This is also the time to discuss what you need to do to prevent spreading the infection if only one of you has it. This may mean using condoms, dental dams or refraining from sex for a period.

If your partner’s reactions are abusive or accusatory, it might be time to take a break and potentially seek safety away from them.

If you have any of these symptoms, keep calm. Cooler heads definitely prevail in this situation. There’s no reason not to get tested if you’re worried that you might have an STI symptom. How do you know if you have an STD if you don’t get tested? Many times, people receive a positive on their STI test, and their life goes on much as it did before.