I’m guessing you want a magic bullet for this one? Do you wish that there was one amazing, awesome, simple sex technique that you could use to solve the problem of what men want in bed? Well… 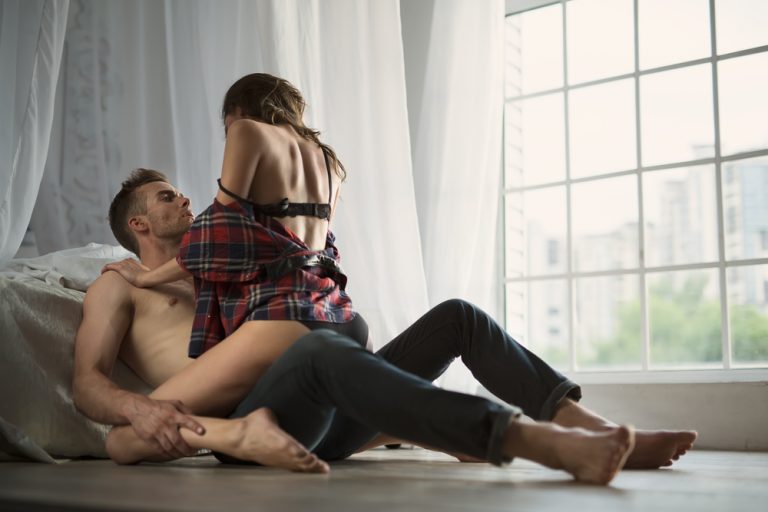 The truth is there isn’t just one thing!

Anyone who tells you that they have a magic, secret formula is simply lying to you. There is no one awesome thing that men want in bed, that will satisfy them every time. It’s usually a combination of things, as I explain below…

1. TO KNOW YOU FIND HIM SEXY

Imagine how powerful you feel when your man looks at you like you’re the sexiest person in the world. If you struggle with insecurities, you might need your partner to show you that he desires you. Guess what? Men want to feel desired, too.

And this can lead to greater sexual satisfaction because, as one study found [1],

That’s right; your man experience doubts about his body and genitals just like you do!

A long, deep kiss, a lingering look, or a butt grab can let your man know that you desire him and perhaps that you can’t even keep your hands off him. Of course, it can also initiate sex, which you’ll learn is one of the things that men want sexually.

But even if these little touches and signs of affection don’t lead to sex, your guy will know that you still want him and can make him feel more satisfied with his sex life [2]. And feeling attractive can be an enhancing factor when it comes to sex [3].

The key here is to keep trying out new things and not just using the same 1 or 2 techniques.

Exploration is a big part of what makes sex so fun. There are plenty of articles on the Bad Girls Bible that will give you the inspiration to explore. But you might find some of the following especially helpful:

3. TO CONNECT WITH YOU

And for men who are in relationships, feeling a romantic connection through sex is also important. Women may be more driven to have sex because of love and commitment [5], but it doesn’t mean that guys don’t like romance, too. Sometimes dirty, rough sex is what it takes, but it’s okay to slow things down and gaze lovingly into your partner’s eyes as you make love.

Men are expected to initiate sex, to do most of the physical labor,  and to maintain an erection. Many guys feel pressure because of this sexual script, which may not be doing you much good, either. You can help him to reduce this pressure. Here are a few ideas.

Don’t focus solely on orgasm: Although it’s typical for us to define the end of sex as when a man has had an orgasm, and many men focus on that as their goal, it isn’t the only consideration when it comes to sexual satisfaction. One of the things men love in bed is simply feeling relaxed afterward [6].

Think of ways you can relieve the pressure your partner might be having about sex, and he’s bound to show appreciation.

Now, many of these things may require you to be more active and bold sexually. Trust me when I say that’s definitely what men want sexually. A forward and confident lover can not only make him want more sex, but it can help the two of you have better sex.

5. TO KNOW YOU’RE HAVING A GOOD TIME

Men can be selfish in bed, especially during casual encounters, but many guys care about their partner’s pleasure. In fact, people tend to report that their partner’s satisfaction matters and affects theirs when in a relationship. This could be why women are more likely to have orgasms in relationships [7].

But you can love having sex with your man even if you don’t always have orgasms. And you should let your man know this.

It might be by moaning or smiling during sex. Dirty talk can be a great way to turn up the intensity during sex, to ask for what you want, and to compliment your man.

This doesn’t mean you should go over the top of fake it, however; in fact, pretending you’re enjoying something when you’re not having a good time only encourages him to keep doing those things. Just show him that you’re actually enjoying sex when you are.

It’s also okay to tell him that you enjoyed yourself after the fact. Perhaps you give him a sultry kiss in the morning and tell him you can’t wait for him to do that thing he does so well, or you send him a sexy text because you just can’t stop thinking about your last session in the sack together.

If your man takes the initiative, does most of the work, and is a giving lover, then he’s going to want to know that he’s doing a good job. Letting him know he is, will boost his confidence and quash insecurities.

6. TO EXPLORE HIS FANTASIES

Pretty much everyone has a sexual fantasy and where there are fantasies that you may never want to explore in reality, there are probably some that you do want to explore. The same is typically true of men. Exploring his fantasies is a great way to give him what he wants in bed, and it might also fulfill some of your own fantasies.

Instead of directly asking your man what he wants in bed, you may need to be a little more indirect, otherwise, he might clam up and not respond. A great way to be indirect about asking he what he wants in bed is to first tell him what you want to try and then judge his reaction.

When telling him what you want to try, start off with simple things like new positions or trying out a fantasy or roleplay. If he looks interested, then try asking him if there is anything that he’d like to try. It’s best to do this when he is in a good mood, like right after sex.

7. TO KNOW WHAT YOU WANT

But if you want to connect with your man, to understand what men like in bed and to improve your sex life, then you need to talk about sex. You can certainly let your man know what he’s doing that’s working, but it’s just as important to give him gentle correction when he’s not.

Tip: if you need something different, try praise. Something like

That feels good, and you know what would feel even better? If you did X.

Replace “X” with whatever activity or technique that you desire. Praise can get you much further than criticism.

However, there are many things that can hold you back from being open about sex. Changing the way you think about sex is crucial to improving your sex life.

While it’s silly to think that all men think about is having sex, there is a kernel of truth in that. A team of researchers consisting of Roy F. Baumeister, Kathleen R. Catanese, and Kathleen D. Vohs reviewed several studies and concluded that men have higher sex drives than women [10]

But if you’re not having sex frequently, then your man might be frustrated or resentful. Some guys use this as an excuse to cheat. Of course, there’s no good reason to cheat on a person, but making an effort to have sex more often can improve your relationship.

Plus, you might find that you’re actually happier to have more sex. One survey found that once a week is the magic number [11]. And if there are reasons why you can’t have sex more often, consider the ways you can make the sex you’re having even better.

As you read over this list of things men want in bed, you probably realize that many of them are things you want in bed, too. Although there are some differences to appreciate when it comes to a few things (check out the science section below), men and women are often more similar than different. Everyone wants to live authentically and to have good sex without limitations.

While we can’t always get what we want in bed, we can often get pretty close if our partners are willing to work with us. This is how you’ll discover your guy’s individual wants and needs. Don’t be disappointed because there’s no magic wand to wave to know what men want in bed. Instead, enjoy experimenting and the pleasure and closeness it can provide both of you.