WHY DO MEN CHEAT? 7 REASONS YOU MIGHT NOT SUSPECT

While statistics on cheating vary, one study estimated that approximately one-third of men cheat as opposed to approximately one-quarter of women [1]. Having your man cheat on you can be completely devastating, shaking up your world and leaving you wondering if dissolving the relationship is the only answer to dealing with this betrayal. However, before you make a decision, it’s important to understand why men cheat, how to deal with cheating, and whether there’s anything you can do to reduce the likelihood of cheating within your relationship. In some cases, it may be possible to save the relationship if you’re committed to doing so. 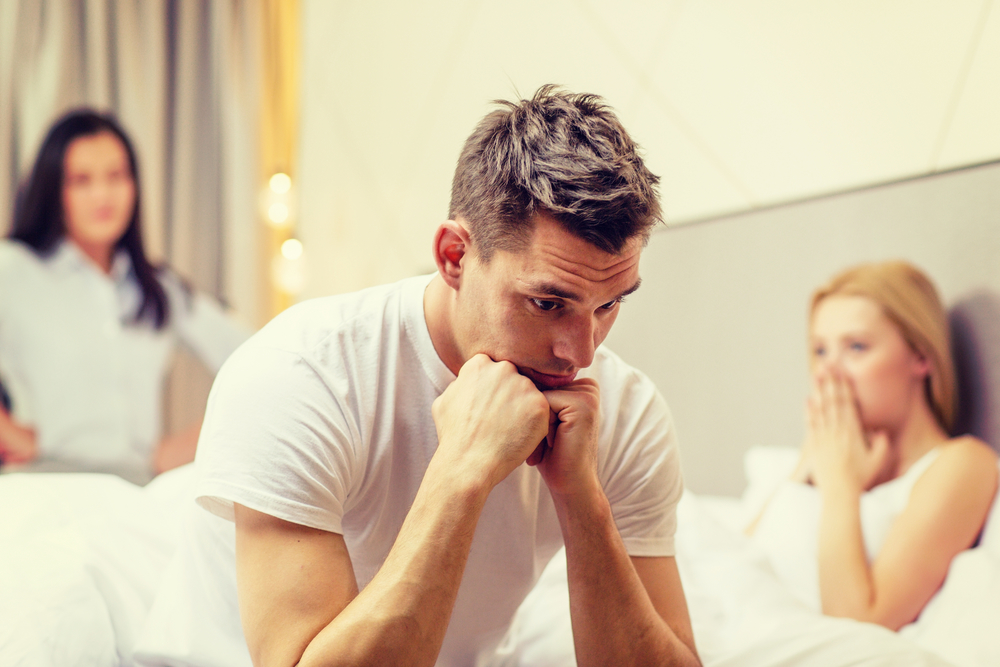 Cheating is often defined as having sex with an individual outside of your current relationship, but it’s not always that simple. Cheating can come in various shapes and forms, but every form of cheating can be devastating to your relationship.

Physical cheating is the most commonly thought of type of cheating, which involves being sexually intimate with a person other than your current partner. It’s also the most common type of cheating [2]. Physical behaviors such as kissing, hugging, necking, oral sex, touching, and intercourse may all be associated with physical cheating, although some people have differing opinions [3].

Although this type of cheating is common in both men and women, it affects them in different ways. When a man cheats on a woman physically, she’s often more likely to see beyond physical cheating if she feels that no emotions were involved in this affair. This is crucial to overcoming trust issue.

Physical and emotional cheating are both the most recognized forms of cheating, but the popularity of the internet has resulted in cyber cheating becoming increasingly prevalent today as well. In fact, cyber cheating is now thought to be as traumatic as actual infidelity on relationships. The definition of cyber infidelity is a sexual and/or romantic relationship with another individual that starts with online contact and is maintained through electronic conversations that take place through chat rooms, email, messengers, etc. It may be one continuous extraneous relationship or synchronous relationships with multiple members of the opposite sex [4]. Some polls have shown that men are more likely to consider electronic activities such as sending sexual photos or messages as cheating [5].

THE MAIN REASONS WHY MEN CHEAT

Cheating when in a relationship can be socially, financially, and personally costly, yet many men continue to cheat despite the risks. Why? Research and studies shed some light on some of the main reasons that men are unfaithful to their relationship partner.

REASON #1 – CHEATING AS A PART OF CULTURE

Overall, cultural standards forbid extramarital affairs, but behaviors in different cultures may actually vary. For example, in some Hispanic culture, it’s often understood that the man may have extramarital relationships. In the Igbo society found in Southeastern Nigeria, men of financial stature display girlfriends to peers to show their status, while their wives are strictly forbidden from having affairs. In Thailand, where commercial sex is the norm, infidelity has also become very common as a part of that culture. Because extramarital affairs have been common in various cultures around the world, some men still feel that they deserve to have affairs on the side, while most of these men feel that their wives should remain committed to them [7].

Feeling unsatisfied with the sex within a relationship and unmet sexual desire is one of the most reasons that men cheat. In some cases, a partner may not have the same sex drive as the man (learn how to increase sex drive), and when his sexual needs are not met, he may go somewhere else to have them met. One recent study suggested that men may be more likely to succumb to cheating than women because they experience far stronger sexual impulses than women do. Men studied reported that they experienced stronger sexual impulses than women did and they were more likely to act on those impulses [8].

Give him great sex, and he’ll have less reason to stray.

Romantic love is considered an essential ingredient for committed relationships, and the idea that romantic love should last a lifetime prevails. However, it is possible for individuals to fall out of love with their partners for many reasons, including loss of intimacy and trust (learn how to trust again), emotional pain, negative sense of self, or even a sense of gradual decline in the relationship [9]. When a man feels that there’s no longer love in the relationship, then he may decide to cheat on his current partner because he no longer feels love for that partner. This may also involve him falling in love with someone else.

REASON #4 – HE WANTS OUT OF THE RELATIONSHIP

Watch out for these signs he wants to break up with you.

Men often feel that their sexual and emotional needs should constantly be met by their partners, but women are often juggling many priorities, such as finances, home, work, and children. When a man’s needs, whatever they may be for the specific individual, are no longer being met, he’s more likely to cheat [12]. Even though he may have unreasonable expectations, if he feels that his needs are not being met, then he may also feel entitled to look for intimate attention from someone else.

Compulsive sexual behavior, often called sex addition, is a psychiatric disorder that may be the reason a man cheats in a relationship, and today there are a growing number of treatment centers dedicated to the treatment of sexual addictions. One of the main hallmarks of sex addiction is the continued engagement in sexual activities (the saying “once a cheater, always a cheater” might be true here), even when there are negative consequences to these actions [14]. This phenomenon is the same as that seen in other impulse control disorders and substance abuse. Psychologically, men may use these sexual behaviors as a way to escape physical or emotional pain, although these sexual behaviors actually create a cycle of even more problems and increasing preoccupation, desperation, and shame [15].

HOW LIKELY IS A MAN TO CHEAT?

The likelihood of why a man will cheat depends on many different factors. Studies have shown that both men and women are more likely to engage in infidelity the more economically dependent they are on their spouses. Men particularly don’t like feeling dependent upon another individual, and there’s around a 15% chance that men who are completely economically dependent on their spouse will end up cheating. Men who bring home 70% of the home’s income are the least likely to cheat. However, men who bring more than 70% of the home’s income become more likely to cheat as well [16].

Other studies have shown that college-educated men are less likely to have affairs, so lack of a college education may make a man slightly more likely to cheat. Being unhappy also increases the likelihood that a man will be unfaithful in a relationship [17]. Men who have jobs that require overnight travel are more likely to cheat because they are presented with more opportunities to cheat. Cheating is also more common when couples are cohabitating as opposed to being married [18]. Biblical beliefs and regular church attendance are factors that have been associated with lower rates of infidelity [19].

CAN YOU KEEP HIM FROM CHEATING?

While many women insist that their partner will never cheat on them, infidelity continues to be prevalent in today’s society. Although there’s no one thing that can affair-proof your relationship, preventing affairs requires a lot of conscientious and constant effort from both partners. You cannot control your partner’s actions, but there are some steps that can be taken consistently to reduce the likelihood of infidelity.

MAKE YOUR RELATIONSHIP A PRIORITY

As previously mentioned, when a man feels like his needs aren’t being met, whether they’re emotional or sexual, he’s more likely to cheat. While you cannot meet every need of your partner, you can make sure you’re making the relationship a priority. Failing to prioritize your marriage is one of the biggest issues that can result in cheating. While you’re spending time on your kids, hobbies, community events, and your career, you could be leaving your relationship behind. Make the relationship a priority by setting time aside for the two of you, making your relationship come first, discussing your commitment, and telling your partner how important he is to you regularly [20].

In any relationship, conflict is going to occur at some point. However, you cannot avoid conflict or harbor resentment towards one another. Failing to deal with conflict and strain effectively can result in affairs within a relationship. Discussing frustrations honestly and openly is important. Be clear about what you’re thinking, don’t place blame, and don’t store up your frustrations. Learn how to compromise with each other when conflict does arise in the relationship [21].

Partners who are satisfied generally don’t wander, and one of the best ways to prevent cheating is to work on regularly rekindling romance within a relationship (try these romantic gestures). The passion and romance in a relationship often waxes and wanes throughout the relationship, but studies on the effects of love on the brain have shown that it’s possible to reignite passionate, romantic love so the relationship feels new and exciting once again. One of the best ways to do this is to engage in sexual activity with each other, since it activates the reward circuit in the brain and increases oxytocin levels, which can make couples desire each other even more [22]. Focusing on being romantic, going on date, sharing the initiating of lovemaking (get tips for making love for a deeper connection), and being sensitive to the needs and wishes of your partner can all help rekindle romance and passion in a relationship.