WHY IS HE IGNORING ME: 13 REASON WHY IGNORES YOUR TEXTS, CALLS & MORE

Many people find themselves asking “Why is he ignoring me?” after a while. When your phone remains dark and calls unanswered, it’s normal to get a bit anxious and wonder if something’s up. Your mind might head to the worst possible place, such as a car accident, but that’s usually not the issue — especially when you can see he’s active on social media. Read on to learn why he’s ignoring you and what you can do about it. 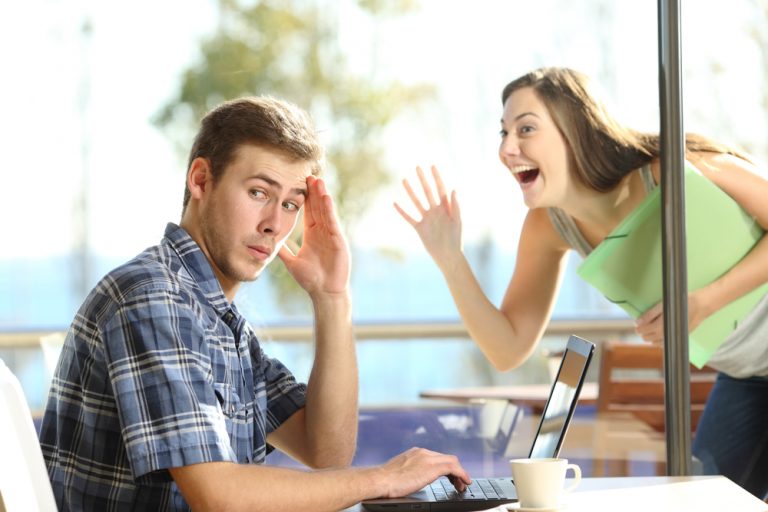 IS HE REALLY IGNORING YOU?

Of course, this isn’t a reason why he’s ignoring you, but it’s important to consider! Before you can figure out why he ignores you, you need to figure out whether he is actually ignoring you in the first place. If you’re really into someone or if you’re currently in a fight with someone, you might have trouble not thinking of them. Every minute that passes can feel more like a week, and the longer he goes without calling you or returning your message, the more you’re concerned with why he might be ignoring you.

He might not be ignoring you if he simply doesn’t feel a need to contact you as often as you’d like. Perhaps that’s something you can consider and find a compromise about. He may not realize that you really like him (show him you like him with these flirting tricks), that you’re waiting on a reply or that you’re worried about an argument you had (which he may have already forgotten!). Most of these things apply more when you’re in a relationship than just flirting, so talking about them can help resolve some of that anxiety.

WHY IS HE IGNORING ME? 13 REASONS TO CONSIDER

Most of the time when we talk about a guy ignoring you, we mean he’s doing it on purpose. But another thing to consider is whether he’s simply ignoring you for the moment because he’s busy. Maybe he’s asleep or at work where he can’t use his phone. He’s helping his brother move, at a boy’s night or doing something else that doesn’t involve you.

While the age of smartphones means that most people can see and reply to messages at just about every time, it doesn’t necessarily mean that every person agrees with that. Some people put their phones away and forget it for the duration of an activity, and there’s nothing wrong with that. In fact, if you can’t live without him for a couple of hours, you might need to check your own jealousy and work on your insecurities.

Unfortunately, you might come to realize that he’s not necessarily cheating on you. You’re just not his “main” relationship. You might actually be the side chick while he has a girlfriend or wife at home, perhaps with kids and another life that you’re not part of!

If that’s the case, he’ll only contact you and you can only see him at certain times of the day or week. You won’t be able to do spontaneous things, spend a lot of time with him or make plans with the future because he has the find the time to squeeze you in.

Giving someone the silent treatment isn’t healthy or mature, but it’s something some people do when they’re frustrated with their partners. Of course, you can’t work through any issues if he’s not trying to talk to you – and him ignoring you could be a sign that he doesn’t want to work on things.

However, if he lets you know that he needs space and pulls away only to collect his thoughts, it’s not the same as him ignoring you. Give him time. If you pursue too much, you might push him away.

4. HE’S NOT SURE HOW HE FEELS ABOUT YOU

If a guy isn’t sure how he feels about you, it might lead to him ignoring you. He might be taking this time to see if he misses you, or he might be seeing other people that he’ll eventually compare you to. It’s not always nice, but he doesn’t owe you anything if you’re not exclusive and just casually dating.

5. HE’S WAITING FOR YOU TO MESSAGE HIM

It might be that he’s not ignoring you; he’s just waiting for you to make the first move. This can help him gauge how interested you are in him. He may also be nervous or simply not good at starting conversations. Some people, for example, are just better in person than via text or over the phone and keep those conversations to a minimum.

Should you really contact him first? Check out these rules for texting a guy.

The reason you don’t hear from him often isn’t that he’s ignoring you. The truth is that he only contacts you when he wants something because he just doesn’t think of you otherwise. Typically, that’s sex, but it might be something else (a crying shoulder, to borrow money, etc.).

The reason he might seem to be ignoring you is that you send him too many messages. He might just need a break, or he may be trying to send you a message. If you’re really needy, then he might simply stop replying at all, something that’s known as “ghosting” in modern dating,

8. HE WANTS TO MAKE YOU JEALOUS

You can understand the motivation behind this if you’ve ever made a guy wait before you reply. You don’t want to seem overly interested or available. You want him to think that you’re busy and in demand, instead, even if you’re always looking at your phone.

Ignoring someone does have the affect of having them chase you all the more. And if you know the guy who is ignoring you is busy with friends or even other women, it can trigger jealousy within you. This might be a power trip or ego boost on his part, though, so beware!

Find out how you can rule jealousy and not the other way around.

9. HE DOESN’T RESPECT YOUR TIME

He might not be seeing anyone else, but this doesn’t make him a good or decent person, however. If he doesn’t respect your time, he’s likely to show up late, ditch at the last moment or without any notice at all or ignore your messages. You’ll find yourself spending more time waiting for him than time spent with him, and you’re right to be upset over this behavior! It’s becoming all too common, but it’s still rude as hell!

He may not necessarily disrespect you, but he might be terrible with time. Perhaps a few hours go by while he’s playing video games or hanging with the guys. He may lose time watching TV, or an entire weekend might pass while he’s drinking or doing drugs.

Now, many negative behaviors go hand in hand with poor time management. But there’s always a chance this is a skill he just hasn’t developed yet. If he’s willing, he can get better at tracking time and get back to you on time.

11. HE THINKS HE SHOULD MAKE YOU WAIT

Remember that old rule about not contacting someone after sex or a date for three days? Although it’s fallen out of favor, some people still do this. They know that it makes you squirm (although, some people might need some time to process). That discomfort is part of the pickup artist’s handbook, and it somehow got pretty embedding into society.

Have you ever found yourself on the fence about someone only to become obsessed simply because he didn’t call you? Yeah, that can happen.

Fortunately, we’re moving away from that. It’s okay to expect to hear from a guy within a day or two after sex or a date, and you can even let him know upfront that you won’t deal with being ignored.

Sure, it’s easy to reply to a message, but there are a ton of reasons why you shouldn’t (work or driving, for example). Having no reception is one of those reasons. A tall building, a dense forest or a rural location can mean no bars on your phone. International travel is also an impediment when it comes to having cell reception.

So he’s ignoring you. It might be nothing, or it may be your worst fear come true.

Ignoring you is a sign that he’s no longer invested (and perhaps never was in the first place). He’s trying to figure out how to do it or to disengage, so it’s easy for him. In some cases, guys will ignore women until the women do the dirty work of breaking up. That’s a pretty crappy thing to do.

It’s also exactly why you don’t have to stand for someone who ignores you. If you’re in a relationship, you have a right to expect to hear from and see him frequently. If you’ve made it clear that it’s not just sex, then you should speak more than just to set up a booty call (and your dates should be about more than just sex).

Are you into booty calls? Discover how to set up a booty call.

When he ignores you, it could be a sign that he’s immature, isn’t ready to commit and plays games. That’s not a healthy foundation for a relationship. Sometimes the question isn’t “Why is he ignoring me?” — it’s whether you should break up with him.

Not sure if you should end things? Read this post about when to break up.

But you may also need to take a step back. Did you tell a guy you were okay with NSA sex and suddenly find yourself clingy after? If your expectations don’t match your agreement, then he may think he’s right to ignore you.

Furthermore, pestering him can have some negative side effects. You might find yourself looking desperate and losing face while his ego swells. And if you’re really clingy, you might do better to deal with your anxiety over sex and dating rather than wondering why he’s not ignoring you. Perhaps you simply expect too much communication from him, which can happen easily when we’re all so hyperconnected.

Read: How to Stop Being So Clingy

You might not expect to do a lot of self-analyzing when you ask “Why is he ignoring me?”. But doing so can be just as revealing as looking at this guy’s actions and it can help you determine how long to put up with this behavior or if you can do anything to fix it.